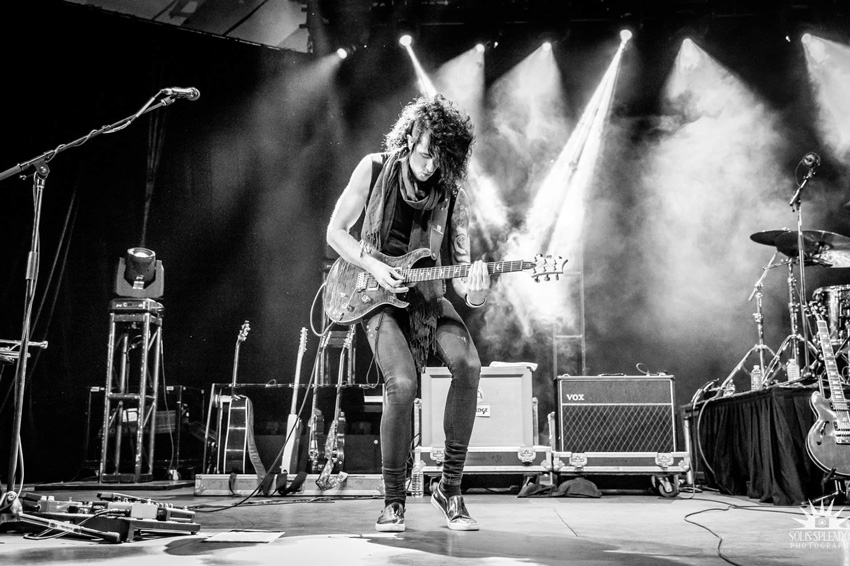 PRS artist Lonny Eagleton is a professional touring guitarist who has worked with several major label acts including Shawn Hook, Hailee Steinfeld, and Vanessa Hudgens. He has toured extensively throughout North America, and has performed on Jimmy Kimmel Live, The Today Show, The Juno Awards, and The Much Music Video Awards. Lonny can most often be seen wielding his trusty PRS CE 24. 5 MINUTES WITH LONNY PRS: How did you start playing music/guitar? How old were you? LE: I was 13 years old, and one day at school I saw a kid playing the riff to Master Of Puppets. It was literally the coolest thing I had ever seen, and right then I knew that I wanted to learn the guitar. I was lucky enough to get one for Christmas that year, and my life was forever changed. PRS: What was it about that guitar that first pulled you in? Who were some of your biggest musical influences? LE: My earliest influences were all the classic guitar heroes that a young teenage rocker looks up to; Jimmy Page, Angus Young, SRV, Jimi Hendrix, Slash, EVH, to name my favourites. I loved learning their riffs, studying their personalities on stage, learning their moves, and dreaming about one day playing big shows and touring like they did.

PRS: How would you describe yourself stylistically? LE: Being a hired gun, I am able to adapt to and play most styles, so to speak. However if I had to pin-point it I'd say I feel most at home in the blues/rock genre, as that is where my musical roots lie. These days however, I'm playing a ton of pop music, which is interesting because people don't often associate it with guitar, yet it's actually filled with some of the coolest guitar parts you'll ever hear. A lot of it is about playing in the pocket and accurately replicating tones, which I love. PRS: What's been your coolest experience as a guitar player? LE: I'll never forget my first night sleeping in a pro tour bus. I really felt as though I had "made it", and it was definitely a milestone for me personally. There are certain feelings that are literally indescribable, and I've been fortunate enough to experience a lot of those so far in my career.

PRS: In addition to being a touring guitar player, you've also done quite a few sessions. What makes for a good session? LE: Yes, most recently I performed on a track which was featured in the film Miracle Season. Watching that in theatres and hearing myself on the big screen was pretty special. Doing sessions is a great way to fill my schedule in between tours, and I even do sessions remotely while I'm on the road too. What makes for a good session is when the song inspires you to play. The easiest sessions are the ones where you don't even have to think and you can just lay back and let your guitar sing to you. PRS: What advice would you give to all the young and emerging guitarists out there? LE: I think Instagram is becoming a very important career tool these days for musicians. It's often the first place people will look when they're referred to a new player, so having a good collection of photos and videos that represent who you are is a good idea if you're looking to make an impression. CONNECT WITH LONNY www.lonnyeagleton.com Facebook Instagram