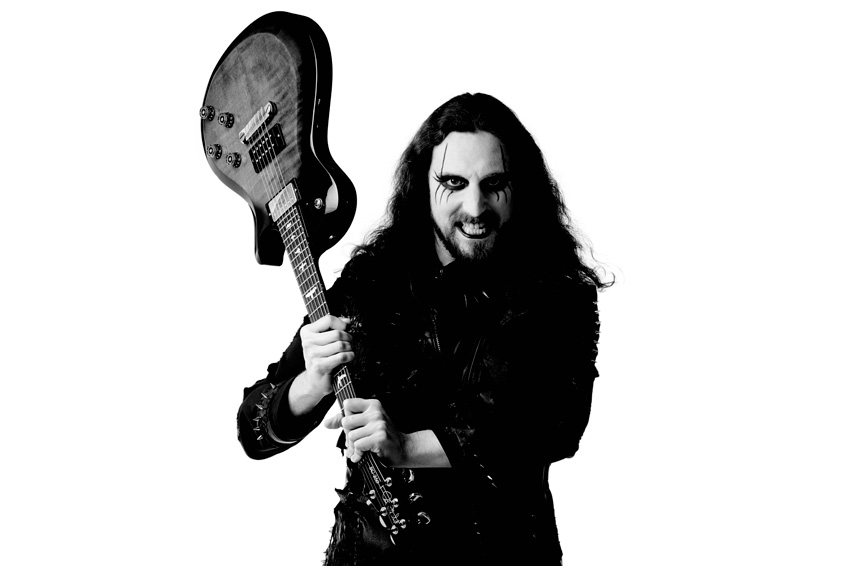 Richard Shaw is a guitarist in UK Grammy-nominated heavy metal band, Cradle of Filth. Since joining in 2014, Richard has written and performed on both 2015's Hammer of the Witches and 2017's Cryptoriana: The Seductiveness of Decay. When not touring the world in support of the band's albums, Richard is an educator and lecturer, lecturing at some of the UK's top music schools. He also is a session musician for amateur theatre, having performed for over 50 productions to date. 5 MINUTES WITH RICHARD PRS: How did you start playing music/guitar? How old were you? RS: I started playing guitar at 11 years old. I've been obsessed with music and guitar playing since I was a toddler, always getting excited when I heard guitar on the radio and listening to my parents' Queen and Prince records or my grandparents' Elvis and Buddy Holly records. The moment that clicked for me was when I first saw a Metallica music video on MTV. That's when I realised what the sound was that was coming from the radio, when I saw someone playing it on TV. It just looked so cool as well as sounded cool. PRS: How often and for how long do you practice? RS: I still practice every day I can on tour. I think it's important to try to constantly improve as a musician and to not get complacent. When I'm home I practice a lot more and varies how many hours day to day, but usually for a particular project I'm working on.

PRS: Do you teach music? RS: I do teach music. When I'm home from tour, I lecture at the Academy of Contemporary Music in Birmingham, as well as conduct masterclasses up and down the UK. I also teach privately students of all ages. PRS: What’s been your coolest experience as a guitar player? RS: My coolest experience as a guitar player must have been Wacken 2015 in Germany. I've been very fortunate to play on the same stages as a lot of my heroes and been able to meet and jam with some of them, but going on after Judas Priest at Wacken in front of close to 100,000 people was something I'll never forget.

PRS: Outside of playing guitar for Cradle of Filth, what other musical projects are you involved in? RS: Other than Cradle of Filth, I'm a session musician who will happily play anything for anyone. I have played guitar for over 50 musical theatre productions, I play in an acoustic covers band and a live karaoke band. I'm always performing at open mic nights. I love playing whenever and wherever I can. PRS: When you aren’t writing music or touring, what do you like to do during your free time? RS: In my free time, I like spending time with family and friends, listening to music, reading, and watching films and TV shows. I'm a bit of an entertainment junkie. But I've usually got a guitar in my hand whilst watching TV. CONNECT WITH RICHARD www.cradleoffilth.com Facebook Instagram Tour Dates