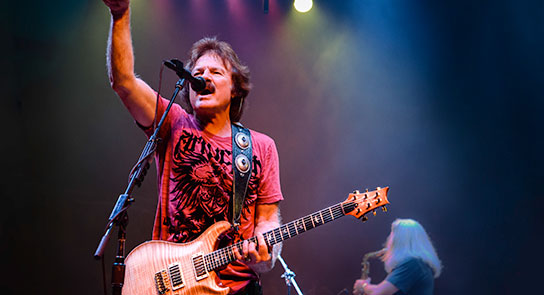 Journey and The Doobie Brothers will launch the “San Francisco Fest 2016” tour on Thursday, May 12, 2016, again bringing together two of the iconic groups that helped define the "San Francisco Sound." The tour, produced by Live Nation, launches at the Irvine Meadows Amphitheatre in Irvine, California – with concerts scheduled through Tuesday, August 30, 2016, and includes special guest Dave Mason. Tickets go on sale to the general public Saturday, December 5, 2015 at 10:00 AM through LiveNation.com. 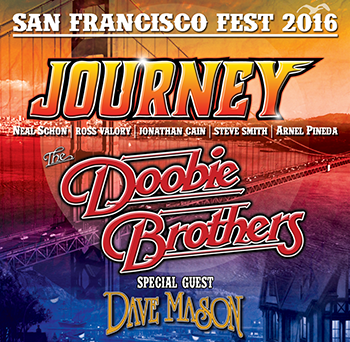 Neal Schon (founding member and lead guitarist), original member Ross Valory (bass), and longtime members Jonathan Cain (keyboardist) and Arnel Pineda (lead singer), are welcoming virtuoso drummer Steve Smith back into Journey, marking the first time he will perform with the band since 1998. Schon and Smith have always remained close friends and musical collaborators. Smith has lent his incredible talent to several of Schon’s solo albums, including critically acclaimed The Calling, and, most recently, Vortex.

Schon was thrilled when Smith accepted his invitation to rejoin Journey, exclaiming, “I'm so looking forward to the very exciting 2016 we have planned, starting with my ‘Neal Vortex Schon’ Japan tour in February and then our major summer tour with The Doobie Brothers and Dave Mason. We will see you All soon!!!!” The Doobie Brothers' Tom Johnston (founding member, vocals/guitar), Patrick Simmons (founding member, vocals/guitar), and longtime member John McFee (guitars/strings/vocals) are adding Little Feat co- founder, Bill Payne, to their band on the 2016 tour. Payne performed on many of The Doobie Brothers studio albums as well as on the road; a relationship the band is looking forward to rekindling. “It’s gonna be a great summer for fans of Bay Area music, and for guys like us who have the pleasure of teaming up with our good friends from Journey and the Dave Mason Band,” said Tom Johnston and Patrick Simmons of The Doobie Brothers. “We look forward to taking the stage with Journey. We love their songs, and think we will all complement each other musically. It is going to be a powerful tour. We can’t wait to share it with the fans!” 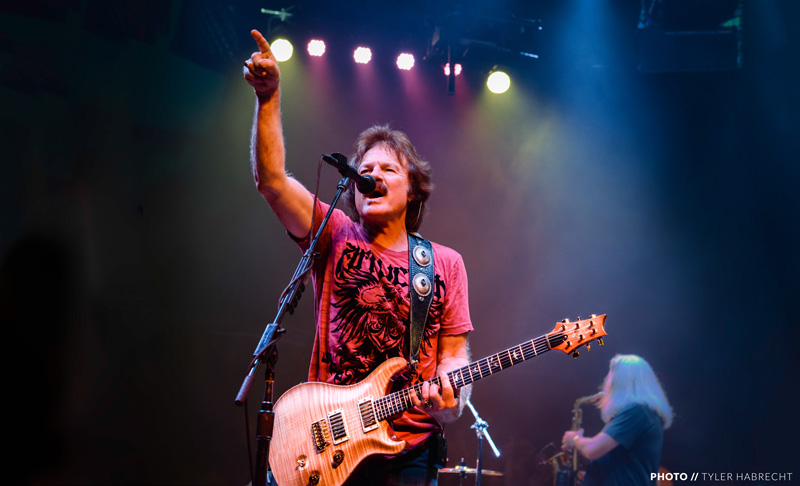 Journey VIP Packages and The Doobie Brothers VIP Packages will both be available through VIP Nation. Journey is one of the most popular American rock bands of all time, creating some of the best-known songs in modern music, with iconic hits such as "Lovin, Touchin', Squeezin’," “Faithfully,” “Lights,” “Any Way You Want It,” “Stone In Love,” "Who's Crying Now," “Wheel In The Sky,” "Open Arms," “Separate Ways,” “Only the Young,” “Be Good to Yourself,” and the seminal “Don’t Stop Believin’,” which is the top-selling digital catalog track in history. Since its formation in 1973 in San Francisco, JOURNEY has sold 80 million albums worldwide, earning 19 Top 40 singles and 25 gold, platinum and multi-platinum albums since. VH1 named the group one of the top 100 artists of all time. The Greatest Hits album is certified 15 times-Platinum, bringing Journey into the elite club of Diamond- certified holders. In 2007, Neal Schon discovered Arnel Pineda on YouTube and succeeded in making Pineda the new lead singer. Two albums and three major tours later, Journey has toured four continents and performed for nearly three million fans, earning the group Billboard’s prestigious "Legend of Live Award." They received a star on the Hollywood Walk of Fame and VH1 has named the group one of the top 100 artists of all time. The Doobie Brothers have been delivering mind-blowing, roots-based, harmony-laden, guitar-driven rock and roll for over four decades, selling more than 48 million albums and winning four GRAMMY® Awards. They released their latest album, Southbound, in November 2014 on Arista Nashville. Southbound features new recordings of the band’s biggest hits, with country music’s biggest stars including Blake Shelton, Zac Brown Band, Brad Paisley and Toby Keith. Boasting one of the most loyal fan bases in music, the band continues to write and record new material and tour the world. Their No. 1 singles “Black Water” (1974) and “What a Fool Believes” (1979), both gold, lead a catalog of indelible songs that include: “Listen to the Music,” “China Grove,” “Jesus Is Just All Right,” “Rockin’ Down the Highway,” “Long Train Runnin’,” “Take Me In Your Arms,” Takin’ it to the Streets,” “Minute by Minute,” “You Belong to Me,” “The Doctor” and more. In all, the Doobies have tallied up five top 10 singles and 16 top 40 hits. Beginning with their multi-million-selling sophomore collection Toulouse Street (1972), the Doobies have 3 multi-platinum, 7 platinum and 14 Gold albums. Their Best of the Doobies (1976) has sold more than 12 million copies – a rare “diamond record.” For more information, visit www.journeymusic.com, www.doobiebros.com and www.davemasonmusic.com.