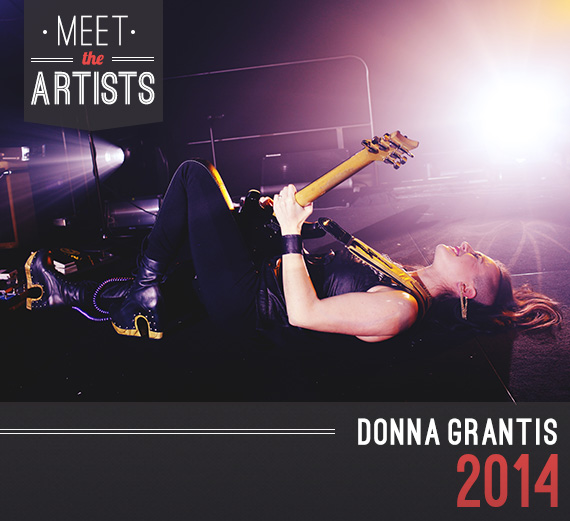 From a young age, Donna Grantis has had a love for guitar and a talent that was hard to ignore. She's worked with award winning artists all over the globe and constantly aims to push the boundaries of her live performance. She is known for making each show musically unique and for interacting with other musicians on stage like a true virtuoso. Donna took some time to answer a few great questions about her musical history, influences, and PRS gear! How did you start playing music/guitar? How old were you? When I was 13, I picked up my older brother’s acoustic guitar. I learned a few chords, bought the tab for Stairway to Heaven, and that was it – I’ve been hooked ever since! Playing acoustic was fun, but I was drawn to the sound of electric guitar, feedback, sustain and overdrive. I made a deal with my dad – if I learned a complete song perfectly on the acoustic, he would buy me an electric. A few months later with Stairway under my fingers, I was the proud owner of an electric guitar. From that moment on, I knew that when I grew up I wanted to be phenomenal electric guitarist. Who were some of your biggest musical influences? Prince, Jimi Hendrix, Jeff Beck, John Scofield, Jimmy Page, Slash, B.B. King, Buddy Guy, Kenny Burrell and Bill Frisell to name a few! Do you prefer the stage or the studio? I love them both, but I’d have to pick the stage! Performing amazing music with incredible musicians is an awesome feeling and, to add to that, having a musical connection with a live audience is a truly magical experience. It’s a total rush! Why PRS? I think PRS Guitars are the greatest guitars in the world. The quality is impeccable, they are stunning works of art and they allow a player’s musical voice to shine through with gorgeous tone. What attracted you to your current PRS guitar? I clearly remember seeing and playing my purple CE22 for the first time. The instant I picked it up it felt great! I wanted an instrument of superior quality that I could cherish for life. There were a number of features I was interested in: a rosewood neck, 22 frets, a whammy bar, a 5 way pickup selector, a comfortable body, solid tuners, great tone and a cool color. The PRS had it all. It’s still my main axe and the model I use the most when performing and recording with PRINCE & 3RDEYEGIRL. What’s been your coolest experience as a guitar player? Performing and recording with PRINCE & 3RDEYEGIRL! One of the coolest experiences in particular was when Prince arranged a song I wrote that is now the title track of our upcoming album, PLECTRUM ELECTRUM. It’s an amazing feeling to hear Prince, drummer Hannah Ford Welton and bassist Ida Nielsen rock out on that song night after night. Everyone adds their musical personality to it and plays with serious passion, groove and conviction. It’s especially cool to see and hear the audience’s reaction to the music – it moves people. What’s on your iPod now? PRINCE & 3RDEYEGIRL, Janelle Monae, Saidah Baba Talibah, Jack White, Medeski Martin & Wood, Oz Noy, Sly & The Family Stone and Wayne Shorter. What advice would you give a wide-eyed teenager in a garage band? Immerse yourself in doing what you love. Play from the heart. Study, listen, transcribe, analyze, practice, play and create music that moves you. Check out these links to learn more about Donna Grantis and her current musical endeavors! Donna Grantis www.donnagrantis.com www.facebook.com/donnagrantis www.twitter.com/donnagrantis www.youtube.com/donnagrantis 3RDEYEGIRL www.3RDEYEGIRL.com www.facebook.com/3RDEYEGIRL www.twitter.com/3RDEYEGIRL www.youtube.com/3RDEYEGIRL