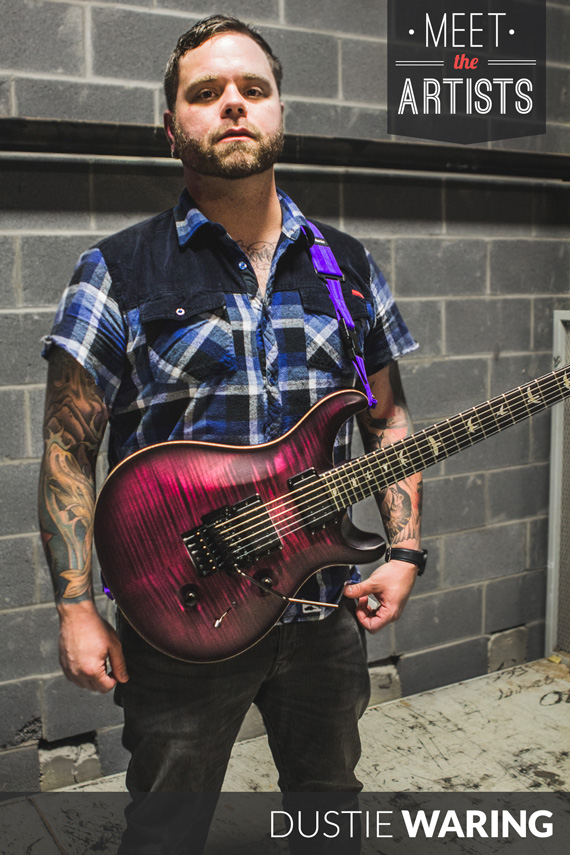 Dustie "Dustball" Waring is the rhythm guitarist for the American heavy metal band Between the Buried and Me. He joined in early 2005 after replacing former guitarist Nick Fletcher. Heavily influenced by bands such as Pantera, Cannibal Corpse, and Dream Theater, Dustie is a self-taught guitar player, mainly learning off instructional videos and by ear. PRS: Who were some of your biggest musical influences? DW: Randy Rhoades was probably the first guitarist that made me wanna play. I loved his approach to the instrument and felt he was way ahead of his time. Then I found Dimebag and Pantera! Everything changed from there. I used to just watch the home videos and wanna practice all day. My Dad and Uncle play as well so they were probably more of an influence than anyone. PRS: When did you realize you wanted to be a professional musician? DW: Long ago! I kind of knew in middle school that playing was all I ever wanted to do. By the time I was about 15, I was playing out every weekend. School didn’t really hold a candle to the feeling I got playing guitar so, it being the only thing I ever thought about, I knew that it would get all of my attention for years to come. PRS: You have a very unique sound as a band and a genuinely progressive vibe. How do your PRS guitars and amps help you achieve this sound? DW: They’re incredibly versatile. You can really go from one end of the spectrum to the other with very little effort. I’ve been playing PRS since 2008 now and couldn’t be happier with every instrument I have. The amps can accommodate any tone or style you’re trying to go for with the twist of a few knobs, which is very hard to come by now a days. Any heavy tone to any clean tone, you can achieve it easily. PRS: Why PRS? DW: PRS guitars are something you can be proud to own. They’re simply incredible! But aside from the amazing looks, crazy playability and super thick sound; the company believes in what they’re building and put everything into it. There’s no sacrifice in any part of the build, it’s 100% all the way. There’s a family vibe at PRS and it shows in every product. For what I do in BTBAM and my other projects, they’re the perfect guitars for me. I’ve wanted one since seeing AIRHEADS back in the 90’s. Haha! PRS: Tell us about your PRS signature model? How involved were you in the design of this guitar? DW: I was very involved in it but had great support and feedback from Bev and Rich throughout the process. My guitar is something that I’ve been playing for several years with little changes and upgrades along the way. I feel like it takes lots of touring, shows, and just putting it through the ringer to really figure out what you want out of it. I chose to go with Satin finishes because I feel like it produces a darker sound and also just looks super awesome. The satin neck is very comfortable and fast, there’s never that sticky thing going on in hot clubs. The black hardware just kind of sets it off! I’ve kind of developed my style around using a Floyd, and dang near every guitar i own has one. It had to be a main feature on the guitar. I’ve been playing my signature DiMarzio pickups for several years now as well so we thought it would be awesome to have them come in the guitar so you’re actually getting the one I’m playing on stage. The guitar is very my style but still will appeal to many players that just want an amazing guitar that looks super badass. PRS: What advice would you give a wide-eyed teenager in a garage band? DW: I would say to give it your best and play as much as possible. Think outside of the box and do something different, something original. Never write music for anyone but yourself, because that’s what it’s all about. Keep at it and be proud of what you’re doing and make sure you have a group of guys that are on the same page and everything will fall into place. It’s a hard to business to be in and things are completely different from the old days.. Haha! You gotta want it and really enjoy what you’re doing.