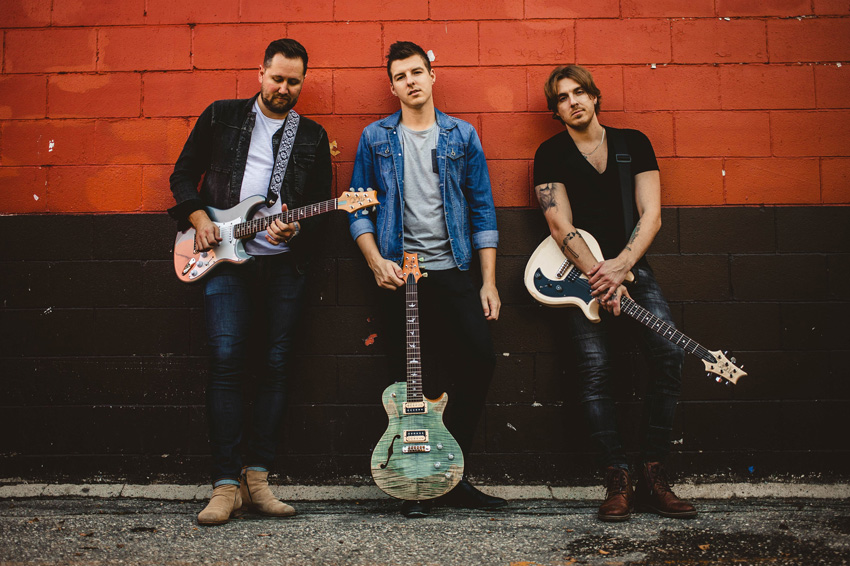 Over the years they have racked up some pretty impressive numbers: over 10m streams on Spotify and Apple Music, 600,000 video views on YouTube, as well as multiple chart topping hit songs on Country radio including three Top 20 singles. Petric also has a shelf full of awards and nominations including a recent 2019 Single of The Year at the Manitoba Country Music Awards with "Single Problem".

With their brand new single "Something To Do With You" starting to climb the charts, a huge show in their hometown of Winnipeg, as well as new music and show announcements around the corner, 2020 is poised to be a great year for the boys from Transcona. Check out our interview with the band below!

PRS: After finding success as a duo, guitarist Jordan Day joined the band. What was the impetus behind the expansion into a trio?

PETRIC: Jordan truly has been a huge part of the “magic” in Petric since day one. When we signed our first record deal, they wanted to brand it as a duo, and we were all in different stages of life, so we rolled with it. As we matured as musicians, adults, and friends/brothers, it was very obvious that Jordan belonged beside us, and Petric is a trio. The three of us will probably all agree that we are at our best when we’re with each other. Making Petric an official trio has been a lot of fun, and a great new challenge. We’ve learned a lot about ourselves and each other on and off stage.

PRS: Not long after its formation, Petric became the first act signed to fellow Canadian country artist Dallas Smith's own record label Steelhead Music, how did that relationship come about?

PETRIC: Our radio tracker Anya Wilson had been working with Dallas for years. She knew he was starting a label, and had heard our demos. Anya thought it would be the right fit for both parties at the time. We were lucky enough to arrange a meeting with Dallas at the CCMAs a few years back, and it led to Petric being his first signing.

PRS: Petric has been making waves in the Canadian country music scene for a while but is also now gaining traction on major streaming platforms. Are you guys looking to leverage this into performing more outside of Canada?

PETRIC: 100%... we’ve recorded a whole new album, and absolutely plan to release and promote it in as many markets as possible. I think the whole band would agree that the best part about this journey is the places it has taken us. We hope this next chapter/album will take us to all new places around this great world.

PRS: We’ve seen you guys performing with our Angelus & Tonare acoustics and know you’ve gotten a chance to play some of our electric models too. Do you have a favorite PRS model or one you’re particularly excited to try?

PETRIC: Jordan’s Silver Sky has to be one of the smoothest guitars we’ve ever had in the group. Everybody wants to play it haha. The S2 Mira Semi-Hollow has been a very very cool guitar. When we were in the studio, shooting out amps and guitars, the Mira sounded absolutely fantastic. We use it all throughout our live shows.

PRS: Are there currently any plans for Petric to release new music or tour outside Manitoba in 2020?

PETRIC: Summer 2020 is going to have us traveling all across Canada! New music, new set, and a whole bunch of new shows to be announced over the next few months... maybe even a new guitar!! Haha!!