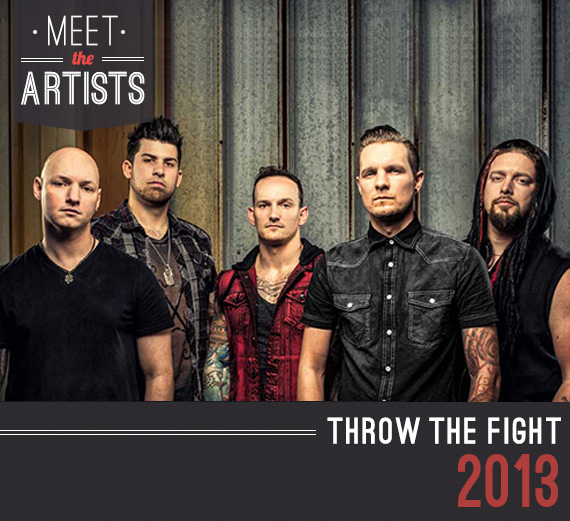 Hailing from Minneapolis, Bullet Tooth Recording artists Throw The Fight stopped by the factory for a visit and sat down with us to answer a few questions. Fresh off the Monster Energy Outbreak Tour, supporting Bullet For My Valentine, Black Veil Brides, and Stars In Stereo, the guys in Throw The Fight are already looking forward to a busy 2014. Here’s what Ryan Baustert & Jon Sutton had to say… How did you start playing music/guitar? How old were you? Jon: I started playing piano when I was a kid, the parents weren’t sure I’d stick with guitar so it was a tough sell… finally got one and started when I was 14. I’m Now 30 years old. Ryan: I started playing guitar when I was 11 years old. My dad got me into Black Sabbath and Metallica when I was in junior high and once that happened, I was hooked. I’ve been playing for 21 years at this point. Who were some of your biggest musical influences? Jon: Starting out Lynyrd skynyrd and all the sweet classic southern riffs they had. I’ve been a huge Mark Tremonti fan for a long time, as well as Clint Lowery. Both great guitar players with their own writing style, with a strong melody and feel mindset. Ryan: In the early years, it was Sabbath, Metallica. I learned how to play by playing their tunes note for note. After that I got into a lot of instrumental and blues players like Joe Satriani, Steve Vai, Stevie Ray Vaughn, Kenny Wayne Sheppard, Clapton, etc. In later years, it was bands like Finch, Story of the Year, Killswitch Engage, Thrice, etc. Do you prefer the stage or the studio? Jon: There are elements of both that I really like. However both can be stressful and hard work! I would say, I’d rather write and record a killer song than play one amazing show. Ryan: There are elements of both that I love. But I’d have to say that I prefer playing live. The best part about being in a band is getting to tour and see the world. There is nothing better than being able to connect with a crowd in a live setting. That being said, it’s been a while since Throw The Fight has hit the studio. So we’re all itching to get back in there and lay down some new tunes. Why PRS? Jon: I’ve always been a PRS guy from the time I could afford to buy my first nice guitar. In 2005 I purchased a used Artist Custom 24. I loved the neck feel, dragon 2 pickups, the gorgeous blonde flame maple top, and of course those PRS curves! Since then I’ve had several others including a few Tremonti Single Cut models and now the S2’s. Ryan: PRS is very new to me and I’ve only been playing PRS for the past 6 months. But I’ve always admired PRS guitars and knew that I wanted one down the line. When I got my hands on the new S2’s, I knew there was no going back. Those guitars sound killer and are everything I need in a guitar. Needless to say, my other guitars are now for sale on Craigslist if anyone is interested. What attracted to your current guitar? Jon: Currently my favorite PRS is that S2 Starla! I love the Bigsby and vintage look, but I couldn’t believe how well it holds our Drop B tuning, such a fun guitar to play. Ryan: I currently have a couple S2 Custom 24’s. My main guitar is an S2 Custom 24 with Tremonti pickups. The playability of these guitars is what attracted me to them in the first place. I’ve got a lot more tonal range with the push/pull tone control these guitars have vs. what I was previously playing. What’s been your coolest experience as a guitar player? Jon: Honestly, I’ve been such a PRS fan, being able to represent that brand officially is a very good feeling. I didn’t have to settle for a lesser guitar brand to get an endorsement. For that I’m very thankful and blessed. Also this recent tour with Bullet For My Valentine was a very cool experience and the biggest tour I’ve been on. Ryan: Hands down our most recent tour that we just wrapped up with Bullet For My Valentine and Black Veil Brides has been my coolest experience as a player. It’s been one of the biggest tours we’ve gotten to be a part of at this point in our careers. What’s on your iPod now? Jon: • Sevendust - "Black Out The Sun" • Alter Bridge - "Fortress" • Slash - "Apocalyptic Love" • Love And Death - "Between Here and Lost" Ryan: • Eye Empire - “Evolve” • Letlive - “The Blackest Beautiful” • Senses Fail - “Renacer” Ryan: • The Damned Things - “Ironiclast” What advice would you give a wide-eyed teenager in a garage band? Jon: Practice Practice Practice – Also if you can sing, learn to play and sing right off the bat. Play along with songs you already know so you can work on singing them and playing them in time. That will be valuable time spent. Ryan: You need to be willing to rehearse your ass off. If you’re just starting out learning guitar, learn to play by learning the songs you love. That way you don’t lose interest. When it comes time to get in the studio to do an EP or album, make sure you hire a great producer and engineer who’s going to make your songs slam. If your album sounds like garbage sonically, you are shooting yourself in the foot right from the start. Learn more about Throw The Fight, links below! www.throwthefight.com Throw the Fight on Facebook Throw the Fight on Twitter Throw The Fight Artist Page