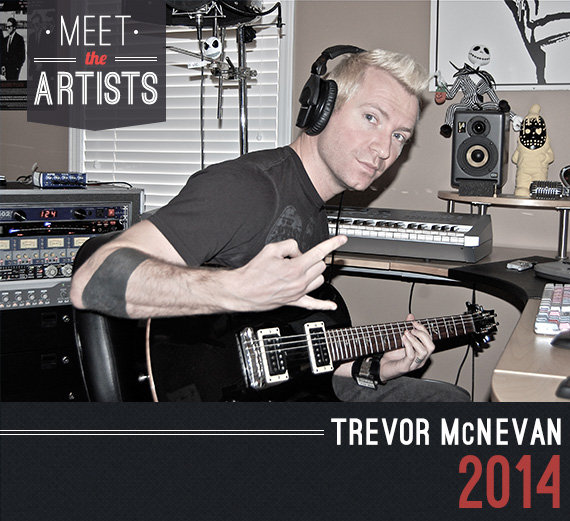 Trevor McNevan Thousand Foot Krutch PRS: Who are some of your biggest musical influences?

TM: I grew up in a small town that only had one radio station, and it was classic rock. I was deep into Hip-Hop from a young age, so I think both of those things will always bleed into what I’m doing musically in one way or another. I’ve always been more drawn to the artists/musicians that were able to tap into communicating with the masses on a powerful level, creating a movement, creating a sound all their own. I’ve always been drawn to the U2’s/Coldplay’s and Jay Z’s of the world for the way that they connect, as much as their songs/music. They’ve created a heartbeat, a soulful connection to their audience that digs deep beneath the surface. PRS: As a songwriter, you must spend a lot of time keeping up on music trends. Can you tell us a little about your process? How did you develop your style and sound? TM: As a songwriter and just as a music fan, I’m up every Monday night at midnight checking out all of the new music coming out across the board. Outside of the band, I’m songwriting full-time from Rock, Pop, Country to Hip-Hop/R&B, love it all! A good song’s a good song, always a fun challenge. For TFK, I spend months gathering voice memos on my phone of vocal melodies and guitar riffs, song ideas, etc. while I’m flying/driving to and from shows and at my home studio, and then start demoing them out, flushing out different melodies/moments and arrangements that work best for the song until there’s a finished demo. Usually for a record, I’ll bring in 50+ song demos and we’ll go through them as a band, and see what feels like the best record to us. Then the guys will take them home, pour themselves into it on drums/bass, we’ll work through what’s best for the songs, and then hit the studio to record. Every record/song is different as far as where the inspiration/style/sound comes from, you don’t really go into it with a blueprint. Sometimes they come together quick, smooth and inspired, and other times they end up being pieces of several songs you’ve worked on put together. Frankenstein;) PRS: You are most known as a songwriter and frontman in TFK but after years of working with you, we know that you are an avid guitar player and a loyal PRS endorser as well. Which PRS guitars do you find yourself gravitating towards during the writing stages of the record and why? TM: On our first indie record in 1997, I didn’t even own a guitar when I came to the studio, and the engineer said “hey, try this” and handed me one of the original, classic, full bodied PRS’s. I remember seeing it in a Silverchair video at the time and being like “Yes! I want to play that!” Haha. It felt like a guitar should feel, it was perfect. I went years without being able to play one again, so when the time came that I was fortunate enough to team up with the PRS family, I felt like I had just won the lottery! I’ve enjoyed and experimented with many guitars from the PRS arsenal over the years, but for TFK, my main “go to” guitars are still the SC250 single cut and the SE Mushok baritone. They cover all the bases from the smooth clean tone, to the classic rock edge, to that meaty baritone growl that embodies some of TFK’s biggest and best guitar riffs to date. When writing/recording, I feel like I can get almost everything I’m aiming for with the like of these two guitars. That said, I’ve been inspired by every one of their guitars that I’ve had the pleasure of playing in different ways. You never know what’s gonna grab you when you’re holding such a well-crafted instrument. Several times I’ve picked up a new guitar right out of the box and wrote a song right then and there. I’ve never played a baritone that held such consistent tone and tuning as the Mushok baritone. They make it easy. PRS: Being a songwriter, you've had some opportunities to work with several other musicians. Tell us a little about some of these collaborations and highlight a few of your most memorable projects. How PRS guitars help you accomplish the desired sound and style? TM: I spend my time outside of TFK songwriting with a slew of other artists/bands from Rock, Pop, Country to Hip-Hop and R&B. A good song’s a good song in any genre! With every opportunity comes a new challenge, and new inspiration. It keeps you fresh. So from Carrie Underwood, Colton Dixon, to Toby Mac, there’s always something new and fresh around the corner, and a new opportunity to create something to capture the heart of the artist, peak the listeners interest and potentially captivate a new audience. Every song is different, and each one takes on a life of their own. That’s part of what I love about the process. Looking at a blank slate, and creating something new and exciting that both speaks to their audience, displays growth, and sometimes pushes the boundaries of where the artist/genres been before, is some of the most exciting moments of my musical career. You have to be able to trust each other and be willing to commit to wherever your inspiration takes you. Some of the best songs come from abandoning your safety suits. That’s where great music lives. Trevor's band Thousand Foot Krutch just released a new album, CHECK IT OUT! Find Thousand Foot Krutch on the web: www.thousandfootkrutch.com Thousand Foot Krutch on Facebook Thousand Foot Krutch on Twitter