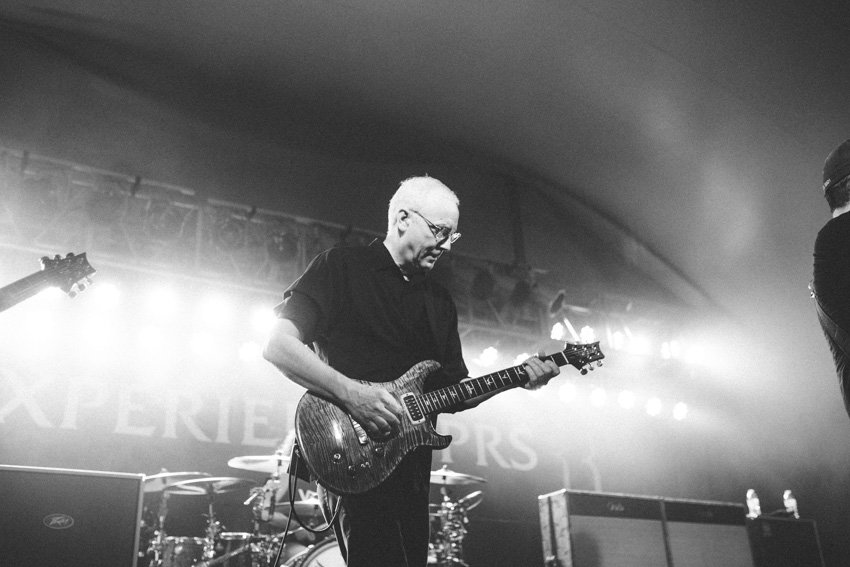 Paul Reed Smith is best known for his work as a guitar-builder, but for Paul, his passion for building wouldn’t have been the same without first loving to play. Today, Paul plays in “The Paul Reed Smith Band.” The group is comprised of talented musicians who are local to Paul’s home in Maryland, but they've traveled the US, Japan, and Europe to play. For this interview, we put guitar-building on the back burner to ask Paul some questions about his first love, playing.

HS: What’s the earliest memory you have of being introduced to music?

HS: How old were you?

PRS: My earliest memories were right before I was 2 years old. My parents gave me a record player and I remember holding the record trying to get the pin in the hole. They also gave me a teeny ukulele. So it was that ukulele and my mother playing folk songs that were my earliest memories of music.

HS: What moment was it that you thought to yourself "I’ve got to learn how to play?”

PRS: For me, it didn’t come like that, but I remember moments in my playing when I spent a month in my bedroom learning vibrato. There was this guy in town who had this beautiful vibrato, and I spent a lot of time trying to make one note sound great. A hundred people can play two notes, but the really good ones can make two notes sound really good.

HS: Is there a musician that has really influenced your approach to playing?

PRS: It’s hard to pull between The Allman Brothers, Jeff Beck, Carlos Santana, Jimmy Page, Hendrix, and all those guys, but the sound in Carlos’s hands was a big deal to me. In terms of being able to make two notes matter, he’s really good at it.

HS: How has your playing changed over the years?

PRS: My meter is better, my understanding of harmony and harmonic content is better. It’s rhythm, harmony, and melody, right? So I have a better sense of all these things individually. But being in a band with the Grainger brothers rhythm section as teachers doesn’t hurt.

HS: Tell me about your first band, what did you guys play?

PRS: We played “Proud Mary,” I’ve been in about 40 bands over the years.

HS: So you started with cover tunes?

PRS: All bands start with cover tunes! You don’t write your own tunes the first day. I’m sure Stevie Wonder learned other tunes first, but I also heard stories that he was better than everyone at their own instrument.

HS: Speaking of Stevie Wonder, he is know for attending NAMM and sometimes sitting in on people’s performances, including ones in the Hilton Lobby where your band will be playing this year. Are you excited to be playing at NAMM this year?

PRS: I was in the lobby at the Hilton when Stevie went up on stage that year. We’re excited to play, we’re playing primetime, 9pm Thursday in the Hilton. Last time we did it we played with David Grissom and Davy Knowles and those guys tore it to shreds.

We have something planned for this year that we’ve been rehearsing. I don’t want to give too much away, but we’re going to start with something special.

HS: There are some really talented musicians in your band, what’s it like working with them?

HS: As a guitarist, what do you look for in an instrument?

PRS: Like an old t-shirt, you wanna put it on and just play music. I don’t want it to sound like an ice pick, or too thuddy, or too much low-mid. I want it to sound musical, beautiful, and magical. The Paul’s Guitar fits and the new pickups are just ridiculous. Now there’s an SE version that Jack (Higginbotham) and I worked really hard on. The goal is for you to plug it in and it just works, you can play a gig with it, do a session with it, it just works.

HS: You have a cool home studio, what influenced you to build that collection of gear and record at home?

PRS: I couldn’t stand when I was in a studio making recordings and I’d take them home and they’d sound different. It’s happened to all of us, right? It sounded one way in the control room, and you’d take it home and it didn’t sound the same. So I built a studio and the very talented Josh Florian helped me get the gear sounding right.

HS: What’s a band practice look like for you guys?

PRS: It used to be sitting around in my studio, but now Gary (Grainger) has us standing up. We’re playing at a rehearsal studio now and tightening things up before playing at NAMM.

^ Gary Grainger is a talented session bassist and has toured with countless acts including John Scofield. He and his brother Greg hold down the rhythm section for Paul's band.

HS: What would you say is the most important skill to have as a band member?

PRS: Maturity and rhythm. The definition of maturity is “responds well to the world.” You need to respond well to everyone around you and what’s going on.

HS: What advice would you give to young and emerging guitarists?

PRS: Learn rhythm, harmony, and melody completely separately, then put them together. So you should be taking drum lessons, be in the choir, and be doing music theory. You gotta study.

To see the instruments used by Paul on stage and in the studio, check out the Paul's Guitar and the SE Paul's Guitar.

The Paul Reed Smith Band will be performing live at NAMM. Catch their set in the Hilton Lobby on Thursday, January 24th at 9PM.