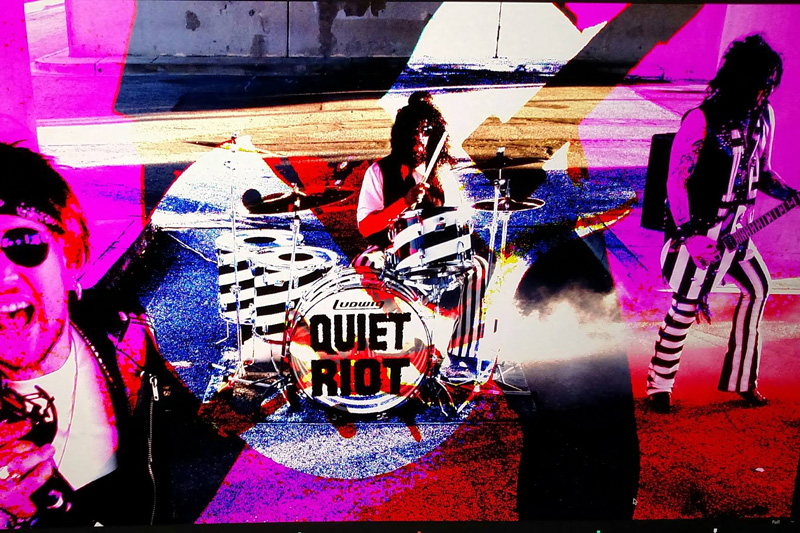 Thanks to his powerful pipes and his love of heavy metal, singer James Durbin parlayed his fourth-place finish on the 10th season of American Idol into the frontman position of veteran band Quiet Riot. Billboard announced in March that Durbin was joining the group, and since then, it’s been a busy time for the vocalist. "I have to be honest, there wasn't much time to think about it or let it hit me," says Durbin when asked what it was like to enter the studio as the group's official singer. "As soon as I joined, I learned the set, we played some amazing shows together, and then I started recording the album." The album he's referring to is Road Rage (Aug. 4, Frontiers Music Srl), a project that was originally recorded with singer Seann Nicols, formerly of Adler's Appetite. However, Nicols left a few months after joining the band due to creative and personal differences. Longtime Quiet Riot drummer Frankie Banalihad reached out to Durbin in 2015 about fronting the group, but Durbin wasn't available due to being committed to a Las Vegas residency. But Durbin happened to meet Quiet Riot guitarist Alex Grossi while he was there (they recorded the EP Maps to the Hollywood Scars: Volume 1 together), which held open the door for Durbin to finally join. Durbin says he was given three weeks to write, demo and begin recording brand-new songs with the music he was provided, which was written by Banali, Grossi, bassist Chuck Wright and Neil Citron, Banali's songwriting partner‪. "It was a real test as a songwriter, but I really enjoyed the creative process," he says. "Road Rage is 100 percent my lyrics and vocal melodies, and I feel very blessed and humbled to have been given that responsibility." Banali describes Road Rage as being "true to the classic Quiet Riot sound. The drums were recorded on 24-track analog, while at the same time we made full use of today's recording technology to add a fresh take on it. This is really what we've done with every Quiet Riot record over the years: blend the past with the present." Billboard has the exclusive premiere for the video of Road Rage track "Can't Get Enough." Banali notes that, lyrically, the song comes from Durbin's life experiences: "From that perspective, I think a lot of people can relate to what this song is about. Musically, it is a very straight-ahead, driving rock song with great melodies in the tradition of Quiet Riot." "Can't Get Enough" is the first video the band has shot in almost three decades. PRS artist Alex Grossi is strumming a white Hollowbody, watch it below!

Banali says the group decided to make the video because it felt "the timing is right to give the fans a visual of the band. Between 1983 and 1987, Quiet Riot videos were well represented on MTV. While obviously much has changed since, it seemed the time was right to release a video to show everyone what Quiet Riot is all about in the 21st century." Another factor was that Banali found "Can't Get Enough" to be an uplifting song with some of the strongest vocal and musical melodies from the album. "The band has always made fun videos, and this was certainly in keeping with that tradition," he says.