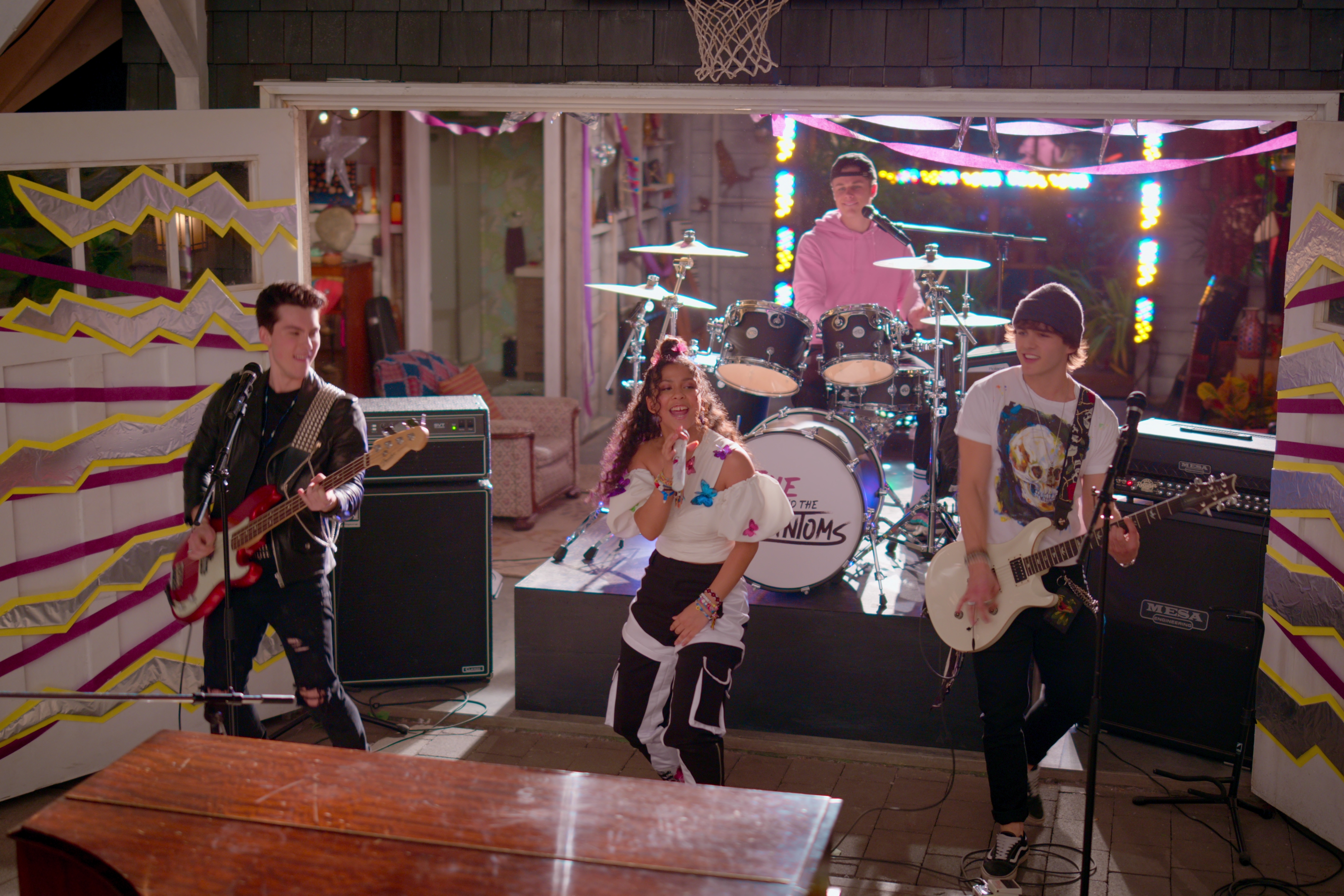 PRS fans with a sharp eye, watching Netflix’s new comedy series Julie and the Phantoms probably noticed Charlie Gillespie AKA "Luke" up onstage armed with his Antique White Custom 24. For those who have yet to see Julie and The Phantoms, we'll give you a rundown of this interesting family friendly show!

The story revolves around Julie, a teenage girl who is rediscovering a passion for music that she lost following the death of her mother. She does so with the help of a new group of friends, "The Phantoms," who quickly become her backing band. This all seems like a fairly straight forward narrative, except for one small detail: her new bandmates are literal phantoms, ghosts of a young band who lost their lives twenty-five years earlier.

The actors portraying The Phantoms in the show were chosen not only for their ability to bring their characters to life, but also their ability to function convincingly as a band. The Phantoms can be seen and heard performing original songs throughout the series. We had a chance to sit down with Charles Gillespie, who plays Luke on the show and handles lead guitar and vocals in The Phantoms. We asked him a few questions about himself and his experiences working on the show.

Q&A WITH CHARLIE GILLESPIE, AKA "LUKE"

PRS: Tell us a little about landing this gig with Netflix. What was it like learning to gel with the rest of the cast, not only as actors but, musicians as well?

CG: We gelled together smoother than Ed Sheeran with his Chewie Loop Pedal, and that’s saying a lot! By the time we started rehearsing, we had already gone through the big network tests with Netflix. It was three days of mix and matching with numerous Julies, Reggies, Alex’s and already felt like we were a team. So, when it came to our 6 week bootcamp before shooting, it was all about becoming the strongest band we could be for filming. Our music team at Netflix lead by Colleen Fitzpatrick with Maureen Crowe organized A-Class performers to educated us. We dove into the fundamentals of music theory and practices, that absolutely launched each of us into this new world of music. Jeremy Shada and I were paired for guitar and bass lessons with Drew Taubenfeld, who can absolutely shred on any stringed instrument. He shared with us his passion which led to our focus and dedication to never stop wanting to grow. As well as Maxwell David, our vocal instructor, who would lead group and solo sessions daily. My voice has never felt so prepared, I’ll be holding on to what he has taught me for life. As a band, we never wanted to fake our performances. We didn’t want to be a tv group who only cared about how we looked on camera. We wanted to be a band who could pick up their instruments and play their songs wherever, whenever because they are our songs. So we all took it seriously, worked our asses off, and a band is now what we’ve become.

CG: Honestly, it is my first major acting role AND musical endeavor. Grew up in a household where music played a major part in our lives. Rehearsals weekly during the school year and then getting to perform at little local events in the summertime. We were kids, on a stage, and just having fun getting to do it together. Julie and the Phantoms however is an entirely other beast. We’ll remember the day we walked through the studio doors at Resonate for the rest of our lives. There were posters on the walls of the artist that had previously recorded there. Legends like Stevie Nicks, Green Day, Dave Matthews Band, Alanis Morissette, Miley Cyrus.. musicians who’ve shaped our love for music, and we’re getting to record our album there!! This journey has already been mind-blowing and it continues to grow. Never in my life would I have ever thought I’d be a part of a band that would make it to the #1 album on iTunes, and to top that, it only took six days after the release! You see, these are memories that are going to stay with me for the rest of my life, I just can’t wait for our Fantoms to see what’s next.

PRS: The Phantoms, the show’s fictional band has been very real for the actors involved as far as performance goes. Was there a completely separate schedule for the group to write and rehearse parallel to the filming of the show?

CG: We were never supposed to write a song for the series. The idea was developed during bootcamp, the more we became a band, the more we wanted the opportunity to play some songs composed by our group. But the possibilities of getting one into the show were low. We started by pitching our ideas to Kenny Ortega, our Music Team and Show runners. You see, there’s this number where our protagonist is trying to convince us to play for his house band, but the sheet music that we were intended to play was old school jazz, and we were rockers! We wanted solos. I wanted to pull out the PRS, slide onto the stage and shred something. We felt that would be way more convincing, not just play the same three chords on repeat. Kenny and our team LOVED the idea. So we got to develop some with our instructors, present what was created and within a few days, it was integrated into the track. The similar story happened with a song of ours called Perfect Harmony. There was an empty slot in our show where they needed the music to be developed for a dance number. Madison Reyes and I decided we should come up with a song ourselves. We would a sneak off during our little breaks, use our lunches and meet up after set and just write. It was our first experience writing lyrics for a song, other than just scribbles in a journal. Once we felt like it was ready to play, we came together, pulled in our show leader Kenny, sang what we had come up with and he instantly loved it. Next thing you know, we’re in Bryan Adams studio, singing away.

PRS: Julie and The Phantoms is an adaptation of a popular Brazilian show of the same name (Julie e os Fantasmas). Did you check out the original series while you were getting acquainted with your character, Luke?

CG: The character Luke was developed for our series, there are similarities with the love interest of the Brazilian show’s Daniel, but the backstories are pretty different I believe. However, we watched a few of the episodes together as a band. The hardest thing was the language barrier for us, most of the videos we could find online didn’t have subtitles so we would try to like guess what was happening. We enjoyed it though, it was fun picking out the differences and noticing the scenes that felt familiar. Ever since our release, they’ve been reaching out and sharing stories from their journey. The story brought them together just like ours.

PRS: As a guitarist, who have been the primary influences on your musical tastes?

CG: Too many to count. I find my influences everywhere, from someone busking on the Blvd, to the legends that have been filling the Stage for decades. There are folks that I admire not just because of their stage presence but were the leaders in the shift from older style music to what we listen today like Elvis Presley, Chuck Berry, Little Richard, the Beatles. Those who just captured you with their soul infused blues like John Mayer and Eric Clapton. The rockers out there who keep pumping me up every morning like the Red Hot Chili Peppers, Green Day, The Band Camino. I feel influenced by everyone who picks up a guitar and jams. Except, I will never forget the time I saw the Eagles live. I was young, but the energy they were creating still hits me to this day.. nothing would ever make me want it give up my seat at that show.

Watch Julie and the Phantoms, available on Netflix now.