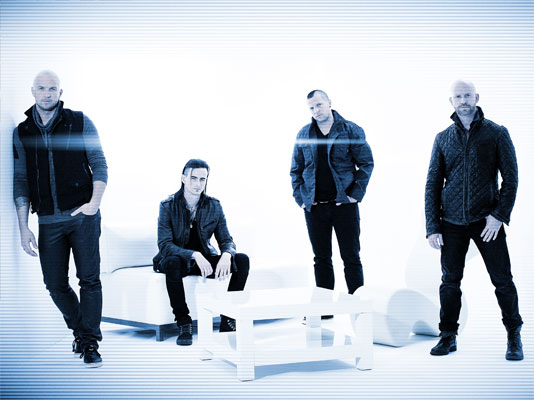 Whatever you thought you knew about Essential Records rock band Red, think again. In fact, that’s exactly what the four-man alternative rock band wants you to do with every track on its fourth project Release The Panic...think again. Think past your first blush take on Red’s lyrical ideas, think beyond the signature aggressive paint- peeling riffs and new-found evocative grooves, and think through the universality of struggle, pain and ultimately hope living in these new songs. Teaming with legendary producer Howard Benson (P.O.D., My Chemical Romance, Daughtry, Skillet and many more) and mixed by both Howard Benson and Mike Plotnikoff, Red has uncovered a potent set of standout songs -- including “Perfect Life,” “Die For You,” “Same Disease” and the title track -- sure to get fans talking, rocking and yes, thinking. 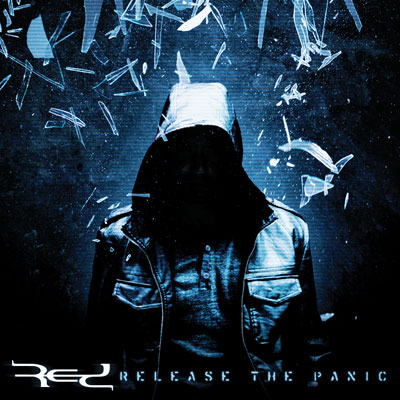 The band -- vocalist Michael Barnes, guitarist Anthony Armstrong, bassist Randy Armstrong and drummer Joe Rickard -- took the unusual step (for them, at least) of clearing the calendar and coming off the road in the first quarter of 2012. While previous Red projects had coalesced amidst the band’s hectic touring schedule, for Release The Panic the band decamped to Los Angeles and Benson’s brand-new West Valley Studios. While in L.A., the band lived, breathed, ate, slept and worked, constantly crafting these new tracks, an experience new and invigorating for all members. “One of the things Howard stressed was that if he had heard it before, he didn’t want to hear it on this record,” says Rickard, “so that’s why we were really striving to make this as original as we could.” At the same time, the band refused to stray away from its pull-no-punches brand of storytelling, with emotive lyrics dealing with mortality, abandonment, paths to redemption and the demands of a pop culture-obsessed society, as found on the initial single, “Perfect Life.” “As we recorded in Los Angeles, the inspiration for that song was all around us, all the time,” Anthony Armstrong says. “So many people have themselves convinced they’re living the sweet life, the good life, and some have worked really hard to get there, but it’s the people who are trying, clawing their way to live this kind of life that’s troubling.” Still, that quest for sonic originality led to some expansion of what Red has become known for: heavy, dark, driving and expansive, with Barnes’ gravelly, guttural, from-a-croon-to-a-scream approach solidifying his stand among rock’s top vocalists. Release The Panic keeps all that, but meshes in beats, loops, layered vocals and -- dare we say it? -- pop elements. The result is instantly identifiable as Red, but with a freshness that could help define the state of rock ‘n’ roll today. “The thing I like about this record is that they’re very forward-thinking songs for a rock band,” Benson says. “These guys are sitting on a powder keg, frankly, and I just can’t wait for the rest of the world to hear it.”   Fans will get a chance to hear songs from Release The Panic when the band jumps on the Winter Jam tour starting in January, followed by a spring headlining tour and select festival dates to be announced. Release The Panic will be available in both Deluxe and Standard editions on February 5. The Deluxe edition includes five additional songs; two brand new and three remixes of “Death of Me,” “Hymn for the Missing” and “Breathe Into Me.” Fans will be able to preorder either version through iTunes on December 11. Shareable links: Album Teaser: http://bit.ly/TZpQxr & “Release The Panic” lyric video: http://bit.ly/Rs14It Release The Panic Track Listing 1. Release The Panic 2. Perfect Life 3. Die For You 4. Damage 5. Same Disease 6. Hold Me Now 7. If We Only 8. So Far Away 9. Glass House 10. The Moment We Come Alive Release The Panic Deluxe Edition Bonus Tracks 11. Love Will Leave A Mark 12. As You Go 13. Hymn For The Missing (Guillotine remix) 14. Death of Me (Guillotine remix) 15. Breathe Into Me (Remix Acústica) About RED: Nashville-based rock outfit RED comprises Michael Barnes (vocals), Anthony Armstrong (guitar) Randy Armstrong (bass) and Joe Rickard (drums). Together, its three prior albums -- End of Silence (2006), Innocence & Instinct (2009), and Until We Have Faces (2011) -- have sold more than 882,000 units, garnering two GRAMMY nominations, five GMA Dove Awards, two Top 10 Active Rock singles, three Top 10 Mainstream Rock singles and 10 consecutive No. 1 hits at Christian radio. Most recently, RED’s Until We Have Faces (Feb. 1, 2011) was the highest national debut at No. 2 on the coveted Billboard Top 200. Additionally, the project topped the following Nielsen SoundScan charts: Current Hard Music, Current Rock Music, Current Alternative, Christian Rock, Current Contemporary Christian Album and Record Label Independent charts. Also its debut week, two of the album’s songs were spotlighted on national TV, with TBS’ “Conan” featuring “Faceless” and NBC’s “Tonight Show with Jay Leno” highlighting “Not Alone.” In addition, RED is known for its relentless touring, performing alongside notable rock names such as Hinder, 3 Doors Down, Creed, Breaking Benjamin, Three Days Grace, Godsmack, Sevendust, Drowing Pool, Flyleaf, Seether, Papa Roach, Buckcherry, Saving Abel, Staind, Third Day, Switchfoot, Skillet and others. Rave reviews for the band’s live shows and albums have been featured in top media outlets including Billboard, USA Today, Modern Drummer Magazine, Rolling Stone and Guitar World. For more information on RED, please visit: www.redmusiconline.com, www.facebook.com/redmusiconline, www.twitter.com/redmusiconline or www.providentpress.com.