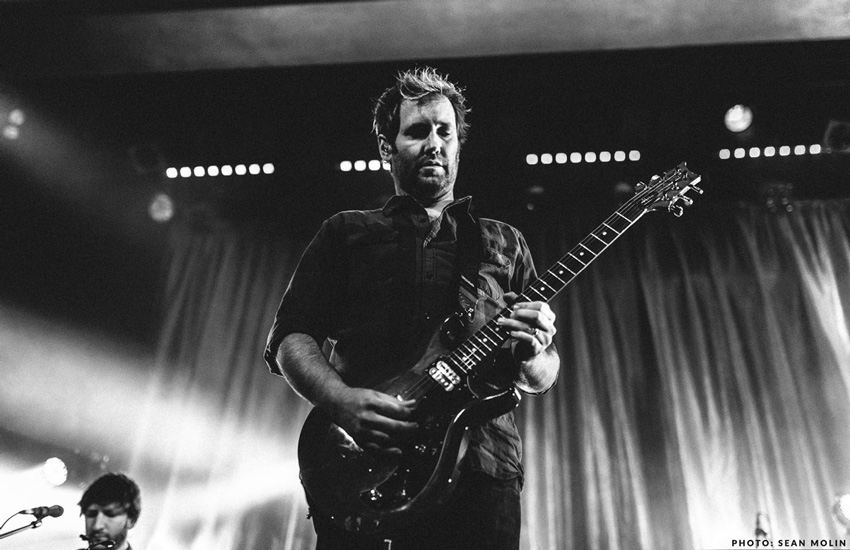 This month, PRS artist Dave Knudson and his bandmates in Minus The Bear pushed off for their final (farewell) tour. This past Summer they shared the news of their final tour, and we think they said it best:

"Friends, After almost two decades of writing and touring the world together, we have decided to close this chapter of our lives as Minus the Bear. What started as a silly inside joke inside the dingy confines of Seattle’s original Cha Cha Lounge back in 2001 quickly snowballed into years of adventures, creativity, and friendship. We could have never predicted the wild journey about to begin. We’ve accomplished so much over the past 17 years, and we are grateful for the experience. Undoubtedly we owe all of these adventures to you, our fans. Without all of you, the memories of traveling the world, exploring different cultures, and witnessing the delight of your beautiful faces singing along wouldn’t have been possible. Your support weathered us through storms that easily could have scuttled the band. Throughout the years, it’s you who kept us going. We cannot thank you enough. This Autumn we head out on our final tour in support of our upcoming 4-song EP “Fair Enough” courtesy of Suicide Squeeze Records. These final shows are a celebration for the community of fans who gave us so much through years of dedication. We’ll be digging deep in the MTB catalogue and we are honored for the opportunity to play our hearts out for you one last time. Love, Alex, Cory, Dave & Jake"

We caught up with Dave so he could share his tour gear list and state of mind as he heads out for the final MTB shows.

PRS: What is in the forefront of your mind as you head out for this last round of tour dates?

DK: I’m trying to soak it all in. We’ve been at this for quite a while and I love hearing and seeing all the appreciation from the fans. They’ve been the backbone of this band for years. We can’t thank them enough. We’ve played two shows so far and the response has been incredible. Seeing people cry during their favorite song will be an indelible memory in my mind forever. I’ll be a mess after the last show for sure.

PRS: What does your pre-show warm up routine look like, what happens the hour before you step on stage?

DK: Normally it’s pretty mellow. Maybe play for a few minutes, talk about the set list and any changes and get ready with my in-ears. Since the first song of this tour, “Drilling”, starts off with a few different samples I head up on stage and get my rig ready and samples dialed in.

PRS: What PRS gear do you plan on taking with you? And how many DL4’s?

DK: I’m using my Twin Reverb as always and the PRS Sonzera 20. They pair really well together especially for the stereo effects coming out of the Strymon TimeLine. I have three DL4s on my board—two exclusively for sampling and one for delay. We’ve written many songs based on the re-triggering and half-time options on that thing. It’s a great tool for me and I always love making my guitar sound like anything but a guitar.

^ An older shot of Dave's rig. No shortage of green DL4's which he uses for sampling & re-triggering.

PRS: For a band that’s been together as long as MTB, there has been a really low turnover of members, what’s your secret to working well with your bandmates?

DK: I think it comes from a shared history of music we love and grew up with. The fact that we were all friends even before the band started certainly has had an impact on longevity. There’s a lot of appreciation for what everyone brings to the music and how we each have our roles in what we do.

PRS: How has playing (and writing) with a guitar changed for you since the band kicked things off in 2001?

DK: Over the course of the years things have morphed a little bit but not too much. Normally a song starts with a couple riffs I bring in that work together in a verse/chorus structure and then we jam on that stuff and re-arrange, improvise, deconstruct and then finalize into a song. Sometimes I’ll have a more involved demo of something but for the most part everything starts with a riff and we build from there.

PRS: What are the features of your PRS that draw you to it?

DK: My McCarty Goldtop was the first PRS I owned after the band started in 2001 and I was immediately hooked. I bought it used at Al’s Guitarville (RIP) in Seattle after wanting one for years. For me it just feels natural. I love the shape and the contour, the easy of playing—especially for tapping riffs high on the neck, and the general feel and tonality. On most records I’ll bring in a few guitars to track with but every time 95% of the record I end up using my Goldtop or Custom 24. They just sound great.

PRS: As someone with over two-decades of writing and touring experience, what’s your advice to young players who want to follow in your footsteps?

DK: Playing live is the most important part. Things change dramatically when you step out of the rehearsal space, bedroom, or basement. The things you learn on stage about yourself and you band mates are nothing that you could imagine while practicing. Also, be patient—with yourself and with your fellow musicians. I’ve only learned this recently but it definitely helps with the dynamic of the group and the togetherness you’ll feel before, during and after a show.

PRS: What are you most looking forward to about December 17th (the day after the final MTB show)?

DK: Oh man, that’s a tough one. I imagine I’ll look back fondly with great appreciation for everything that we’ve accomplished. I’m especially grateful for the fans, crew, families, labels, agents, and industry folks that have helped us out throughout this whole endeavor (I’m looking at you Rich & Bev / PRS). It’ll definitely be a bittersweet end, but one that was necessary. Music will always be one of the most important things in my life and I have no intention of stopping. I’m currently writing a solo record and I can’t wait to see what that blossoms into.

Minus The Bear // The Farewell Tour Dates