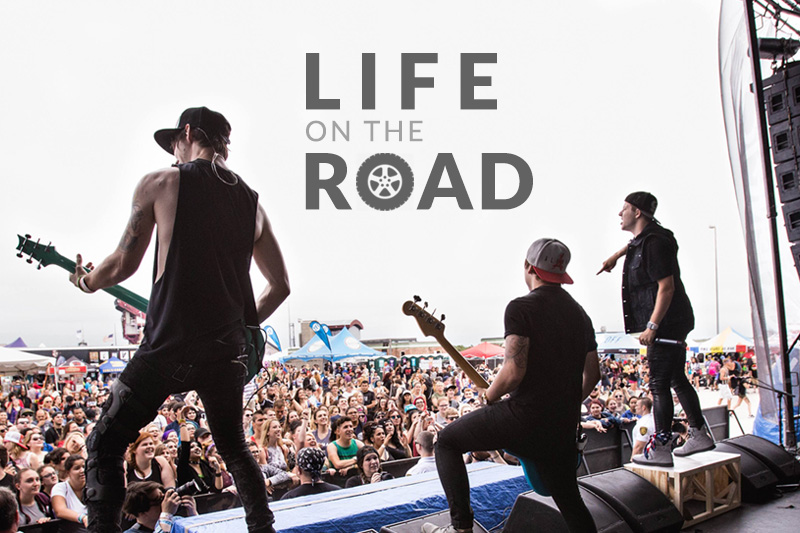 If you’re an up-and-coming musician, surely you’ve dreamed of life on the road, playing gigs every night, traveling the country, and living the rock star life. Right now that lifestyle is a reality for many bands on the Vans Warped Tour presented by Journeys. Warped Tour is the largest traveling music festival in the US, touring over 40 cities and traversing thousands of miles.

But what’s it really like for the musicians? We asked 5 PRS artists with varying degrees of tour experience what real life is like on the road during the Vans Warped Tour. Check out their responses below! 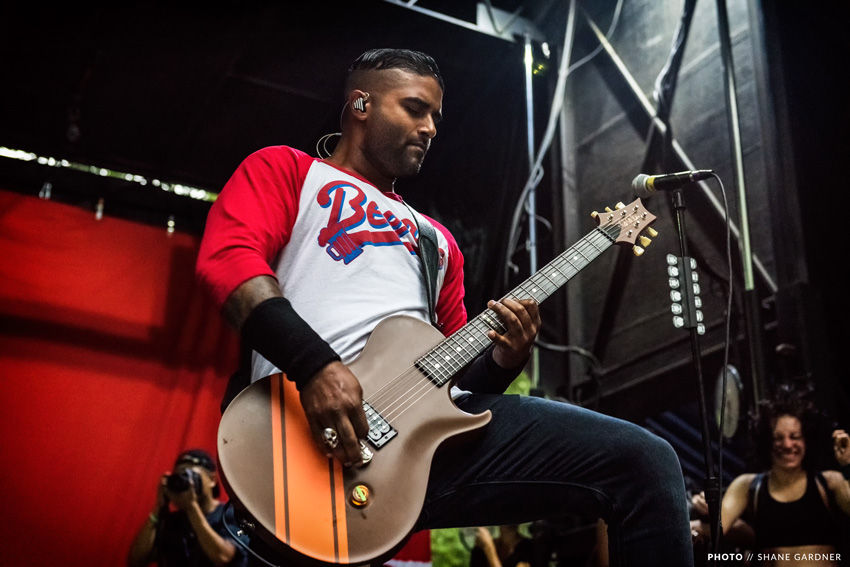 PRS: When do you sleep and how many hours of sleep do you typically get to rest while on tour?

DB: I've just woken up and it's 3:30pm... I will say this though. I was in bed around 4am and right as Tyler Derden was about to fight himself in the movie I was watching. I heard the engine in the bus have trouble restarting. That paired with the paranoia of being stranded in the middle of nowhere got me up and about around 4:10am until 6am.

PRS: What’s your favorite food to eat while on tour?

DB: Beef anything is my weakness. I do love a good pumpkin seed though.

DB: My boy Cowboy has come in and made my life so easy. Warped is no simple task when you are part of the crew so hats off and hopefully one day I can buy him a Dr Pepper drinking fountain.

DB: I think I saw a dinosaur roaming in Sleeping With Siren's guitar world while they were playing. Either they are cloning geniuses or in possession of a DeLorean... Either way it's eating all the beef in catering and bumming me out. 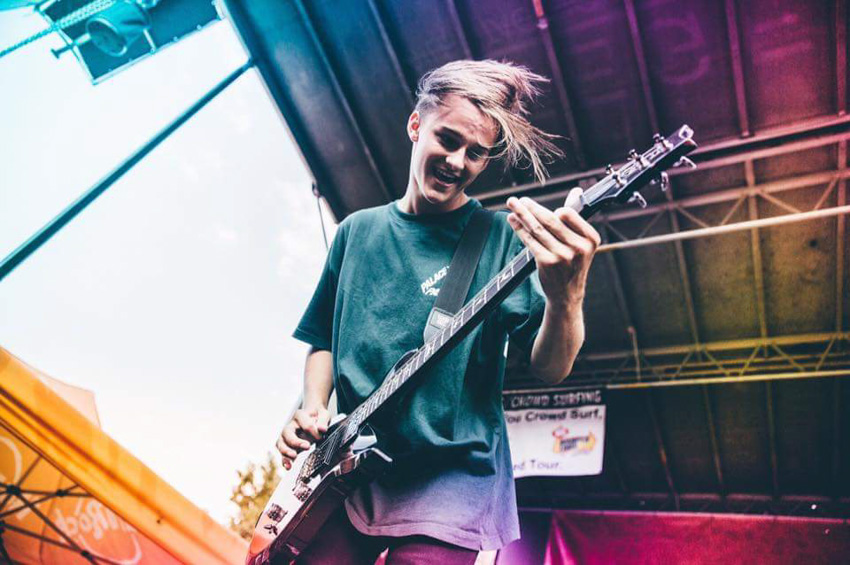 MG: My dad is on the road with me, along with my drummer's dad, and they help us unload our gear at every show.

MG: My favorite thing about being on the Vans Warped Tour is getting the opportunity to play for new people everyday - the audiences have been great. My least favorite thing is the heat.

MG: My dad actually guitar techs for me too.

PRS: What do you do for entertainment when you have down time?

MG: I usually don't have a lot of down time but when I do I just sleep!

Louis Malpeli // THIS IS ALL NOW 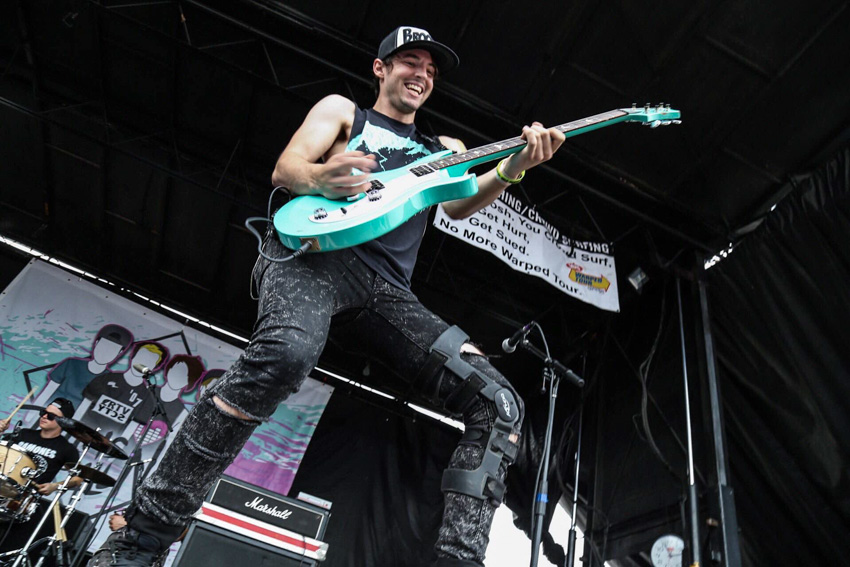 PRS: How many hours are you typically traveling per day on this tour?

LM: On average travel time could be anywhere from 2-6 hours. After a whole day of action, any opportunity to rest up is definitely vital.

LM: One of the craziest things I've seen on the Vans Warped Tour was the mascot of Less Than Jake crowd sailing in an inflatable boat with a paddle. Just paddling through fans, pretty crazy.

LM: I'd say most times the set is the same, although it's definitely worthy of respect being able to switch it up mid-tour without any extra rehearsal time.

PRS: Where do you do your laundry?

LM: Laundry! Most times we get lucky with fan hospitality, but sometimes you gotta suck it up, flip it inside out, and hope no one smells you!

PRS: What do you do for entertainment when you’re not on stage?

LM: For entertainment when I'm not performing, you can usually catch me back stage setting up my PRS instruments, and making sure everything is ready to go come performance time. 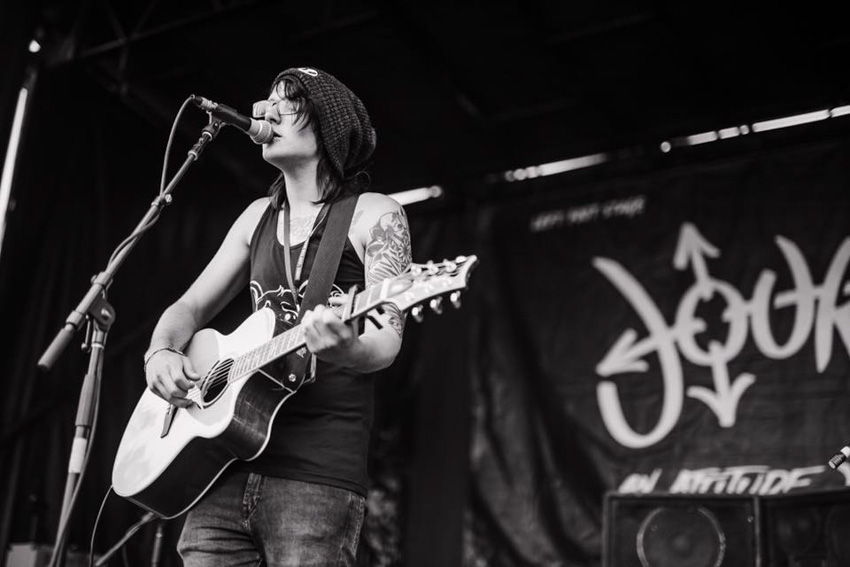 PRS: What's your favorite part about being on the Warped Tour? Least Favorite?

BB: The best part about being on the tour is the environment. It's completely different when you're a moving piece of the tour than just going to watch bands for a day. It's all about doing your best, and just seeing how much everyone cares about their part in the bigger picture is incredible. I love seeing how excited the kids are too. My least favorite part is probably having to walk a mile or take a bus to get a shower, and usually not having time for it.

BB: At this point I do have a guitar tech. I've never enjoyed the process of changing strings because I'm always thinking about a million other things... so it's nice to have someone around who knows what the instrument needs before the set. I never worry about breaking strings any more, I just get up there and kill it.

PRS: Are you playing/writing music at all during travel hours or just trying to chill in between performances?

BB: I'm always writing. Sometimes its one day a week, sometimes it's six. But there are always ideas floating around in the universe that I scoop up. Being on the road away from everything that is familiar is a great time to write because I'm feeling the feelings that come with being away. I wrote pretty much my entire new record on the road... just recording voice memos on my phone, sometimes minutes before my set.

PRS: If you are sick, do you power through and play your set?

BB: I just do. There has only been one time where I couldn't finish a complete set, and that was because my voice literally gave out. I walked out and told everyone "Okay guys, I just want you to know I'm pretty sick right now, so just bear with me" and everyone sang along louder than usual. It was awesome because everyone understood. But I really think it's all about confidence... if you just tell your body you're going to do it, it will listen. You can't give in to that. A few days before that show, I was literally curled up on a wooden bench beside a heater, wrapped in a towel, shivering, and barely able to sit up without feeling nauseous. But I played anyway. You just have to.

PRS: How does your PRS acoustic hold up with all of the various temperature and weather conditions?

BB: It's great. The house guitar last year for the Acoustic Basement tent on the tour was a PRS, the same model I was using. It was nice having a backup, but mine held out amazing. I think it just adapted to the heat. 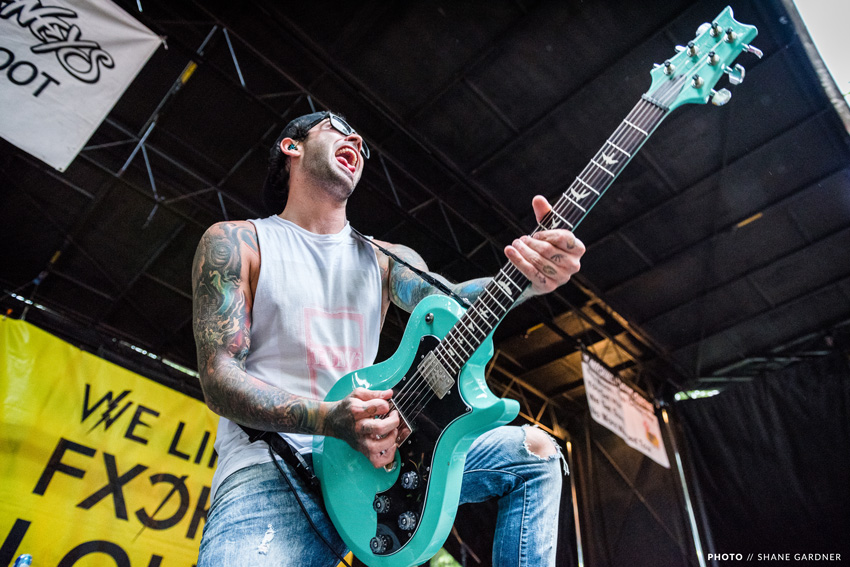 JF: My tech Uncle Touches does it all!!

JF: All my friends and least favorite Porta Potties!

JF: Same list every day, but hell yeah they always sing along!!

PRS: How have your PRS guitars held up for you with the varied temperatures and weather conditions?

JF: So so perfect I could never complain!

JF: Every Time I Die. Hands down!

Check out some scenes from this Summer's Warped Tour below!

To learn more about these PRS artists performing at this year's Warped Tour, check out this blog post!