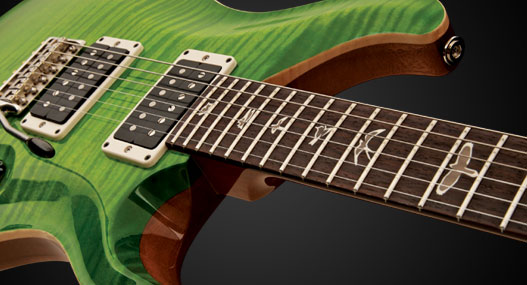 Paul Reed Smith Guitars’ Custom 24 model was updated in 2011 with new pickups and a redesigned 5-way blade switch, giving the flagship model a new voice and even more versatility. For 2012, its revered uncovered 59/09 pickups are being updated with new, contoured bobbins that arc with the strings for a more spread out, open tone. First seen on PRS Collection instruments, these bobbins are a continuation of Paul Reed Smith’s quest to continually tweak and refine the company’s instruments in subtle ways with the goal of culminating in a more musical instrument always in mind.

“Originally, humbucking pickups were covered to combat electrostatic and electromagnetic hum. As the years passed and the covers came off, there was a gap between the pickup and the pickup ring. These new bobbins not only provide extended low and high end, they look like they were meant to be uncovered and in a ring,” said Paul Reed Smith.

These new bobbins can be seen for the first time on PRS Custom 24 guitars at the winter NAMM show in Anaheim, California from January 19-22, 2012 at PRS Booth #5320.