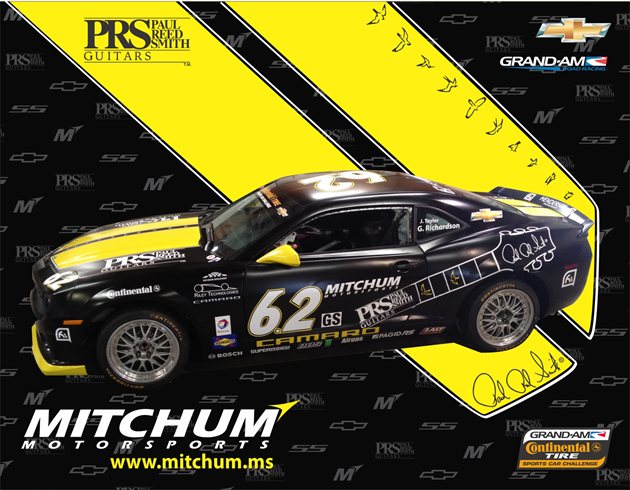 Virginia Beach, VA (September 4, 2012) – Veteran GRAND-AM driver Jordan Taylor has signed on with Mitchum Motorsports for the final two races of the 2012 GRAND-AM Continental Tire Sports Car Challenge season. Taylor will make his GS class debut in the #62 GS.R Chevrolet Camaro at Mazda Raceway Laguna Seca. Co-driving the Camaro will be George Richardson, who is fresh off of a career best GRAND-AM finish at the Indianapolis Motor Speedway, where the #62 finished 2nd.

Also new on the #62 Camaro for Mazda Raceway Laguna Seca is Paul Reed Smith Guitars, who will be the primary sponsor. The new sponsorship is in support of the PRS Experience, a fundraising event held later in September to benefit the GRAND-AM Fan Zone, where a Mitchum Motorsports themed guitar will be auctioned off Johns Hopkins  Kimmel Cancer Center. The #62 Camaro will be on display at Mazda Raceway in the   to benefit the Kimmel Cancer Center.

“We are very excited to have Jordan join us for the final two rounds of the season. He is a fantastic driver who has had an impressive showing so far in his young career,” said team principal Chris Mitchum. “He has a lot of experience in GM cars including a GT class Camaro, a Cadillac and even a Corvette at LeMans this year. His experience and maturity will be a real asset to our program.

“We are coming off a high point for the team with our 2nd place finish at Indy and we  are hopeful that Jordan can keep us heading in the direction we want to be going – to   the top step of the podium,” added Mitchum.

“I am looking forward to joining Mitchum Motorsports next week in Mazda Raceway Laguna Seca. It will be my first time driving the Camaro GS.R in the GRAND-AM Continental Tire Sports Car Challenge, but I'm happy to be joining in with a strong team that is coming off a very good result in Indy,” offered Taylor. “Mazda Raceway is a unique track, and looking at last year’s results, it looks as if the Camaro suits the track quite well. Hopefully we can carry that momentum into California and have a strong race.”

The #62 Camaro will feature a special livery for the California race, one with a guitar nneck on the side of the car, to raise awareness for the PRS Experience to be held from September 13 – 15th in Stevensville, MD. This has turned into an annual event that has contributed to the over $2 million PRS Guitars has raised for charity over the years. Those in attendance at the PRS Experience will get to see the #62 car in its guitar livery, as well as meet team members, as it will be brought from the race back to Maryland for the event.

“After three years of providing PRS trophy guitars for the GRAND-AM Rolex series and working with many DP and GT teams, it is an honor to team up with Mitchum Motorsports to further our relationship with GRAND-AM Road Racing and help the Johns Hopkins Kimmel Cancer Center,” said Jack Higginbotham, president PRS Guitars. “We’ll have a guitar on display in the Mitchum paddock area for everyone to see and we hope to introduce a lot of racing fans to the great work Johns Hopkins does through this partnership.”

Mitchum Motorsports will again be campaigning their second Camaro at Mazda Raceway Laguna Seca with Tim Bell and Gunter Schaldach behind the wheel. The #6 Gamma Labs/Make Direct Camaro also had a strong showing at Indy, finishing just off the podium in 4th. Schaldach and Bell look to continue their recent successes from the last three races and pick up their first podium of the season in California. Schaldach currently sits 2nd in the highly competitive GS class Rookie of the Year points battle.

Away from the track the team has been busy outfitting and moving into a new 20,000 sf facility in Virginia Beach, VA. The shop will house both the race team operations and the street/track car tuning business. The new, large space will give Mitchum the ability to grow the business further by servicing street cars, race cars and track day cars, all at the same location.

Follow the race live at www.GRAND-AM.com via live timing and scoring on Saturday September 8th and follow the team all season long at www.mitchum.ms.