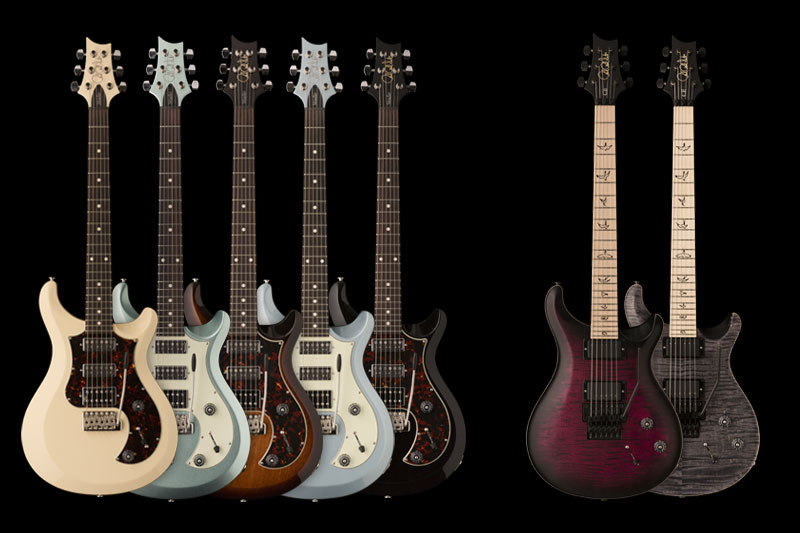 PRS Guitars has announced two exciting and versatile new limited edition models in advance of the 2018 NAMM show: the DW CE 24 “Floyd” and S2 Studio. The DW CE 24 “Floyd” is a new signature model with Between the Buried and Me guitarist Dustie Waring, and the S2 Studio brings the versatility of a single/single/hum platform to PRS’s S2 Series.

The progressive metal band Between the Buried and Me has a sound that is both heavy and melodic, lush and menacing. It is this demand for versatility without sacrifice that led to the development of guitarist Dustie Waring’s latest PRS signature model: the DW CE 24 “Floyd.” This model starts with the PRS CE bolt-on platform and includes a satin-finished maple neck, maple fretboard, a slightly modified Pattern Thin neck carve (Waring’s carve is slightly thinner front to back), and Floyd Rose tremolo system. The DW CE 24 “Floyd” comes with satin black hardware and is available in either Gray Black or Waring Burst.

The pickups and electronics are also unique to Waring’s signature axe. The pickups are Waring’s signature Mojotone “DW Tomahawk” pickups. Made with a blend of Ceramic and Alnico magnets and a special winding technique, DW Tomahawks have plenty of output and big bottom end while remaining articulate and clear - a unique quality for high gain pickups. Paired with a volume and tone control and 5-way blade pickup selector that have been shifted slightly to allow plenty of room to work the tremolo, the DW CE 24 “Floyd” is comfortable, fun, and inspiring to play.

“I’ve always thought CE’s were really great guitars, and I couldn’t be happier with this signature model. It can get pretty much any sound you want it to, it’s super comfortable to play, and it’s just cool to see a CE with a maple board and a Floyd. I hope everyone loves it as much as I do,” said Dustie Waring, Between the Buried and Me.

The second limited edition offering, the S2 Studio, takes the Standard 22 platform into new sonic territory with a single/single/hum pickup configuration and updated switching system. This versatile setup allows for a whole new scope of sounds that are only possible with a three pickup guitar, whether you’re looking for punchy singlecoils, vintage scooped tones, or the chunky kick of a bridge humbucker (that can still be split to singlecoils via the push/pull tone knob for a three single coil set up). With seven combinations in all, the S2 Studio covers classic tones but maintains a unique voice making it a perfect “desert island” guitar.

There is no cap to the number of DW CE 24 “Floyd” signature or S2 Studio guitars that will be made, but the order window for these models is limited to January 16 – March 31, 2018.