For more than thirty years Living Colour have created, recorded and performed their own brand of heavy rock that draws as much inspiration from yesteryear soul men and rock gods as they do from post-bop jazz and boulevard shaking hip-hop. Founded by guitarist Vernon Reid back when he was still a dreadlocked sideman with Ronald Shannon Jackson and other East Village noise ensembles, Living Colour includes vocalist Corey Glover, drummer Will Calhoun and bassist Doug Wimbish. On September 8, Living Colour released their latest studio album, Shade, on Megaforce Records. It’s the legendary New York City rock band’s first new record in eight years. The initial spark for Shade came via the mojo spirit of blues’ pioneer Robert Johnson who possessed Living Colour’s soul during a performance at Harlem’s famed Apollo Theatre. While roaring through an electrically charged cover of Johnson’s classic “Preachin’ Blues,” Living Colour moved both the audience and themselves. “That was really the beginning of us thinking of the direction we want to take for our next project,” says Living Colour guitarist Vernon Reid. “Hearing that blend of blues and metal was really what got the wheels turning.” 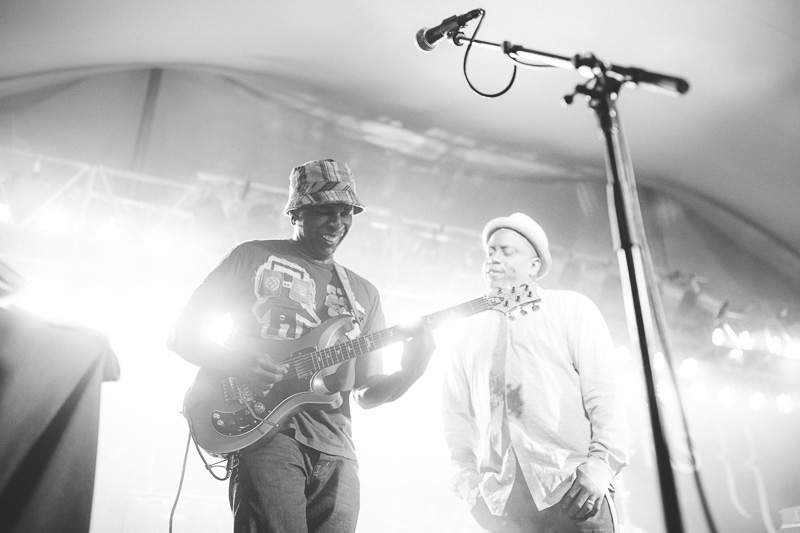 Shade, their first album since the critically acclaimed ‘The Chair in the Doorway’ in 2009, is Living Colour at the height of their creative powers, still experimenting as though they were upstarts instead of seasoned veterans. While the blues served as the foundation for the collection, one shouldn’t expect to hear the “down-home” style that was once the soundtrack of sharecroppers and southern juke joints before the music rode the rails north during the Great Migration. Living Colour’s blues incorporate a myriad of influences, while speaking to the politically-charged climate of the times. The band gave fans a sneak peak of the recording in Fall 2016 when they dropped a reimagined take on The Notorious B.I.G.’s “Who Shot Ya?” in protest of ongoing gun violence and racial profiling. Billboard Magazine wrote of the first single: ”The stuttering, thumping ‘Come On’ came early in the Shade process, and as the track progressed, its lyrics, like many others on the album, swung to embrace the charged tenor of the times.”

“What better way to talk to the world than through the blues?” vocalist Corey Glover asks. “We recorded ‘Preachin’ Blues’ several times to jump start the project and that got everybody fired up. After that, we were ready. ‘Shade, in its final outcome, is more of a deconstruction of the blues than an interpretation. It was the idiom that gave us our voice.” Produced by Andre Betts—who first worked with Living Colour on their album ‘Stain’ in 1993—he would spend five years in the studio with the band perfecting the project. Initially introduced to Living Colour by their bassist Doug Wimbish, Betts was more than ready to face the challenge of working with such perfectionists. “Making records is an art and a process, and sometimes it can be easier to herd cats. But, when it connects and we come together, it’s a beautiful thing. Shade is a testimony to who Living Colour is, to our chameleon quality,” laughs Doug Wimbish who replaced Living Colour’s original bassist Muzz Skillings in 1991. Before joining the group, he was the resident bassist at the ground-breaking rap label Sugar Hill Records as well as a member of Tackhead, an industrial band that was based in England. Without a doubt, that fearless, all-influences-are-fair-game quality comes across clearly on Shade. The 13-track effort is a sonic journey that careens from the furor of “Blak Out,” an old school thrasher that struts with a gangster boogie to “Program,” a searing, socially-spiked cocktail that nods to the band’s iconic hit “Cult of Personality.” Stand-out tracks such as the acid funk balladry of “Two Sides” (complete with a guest appearance by George Clinton) and the afro-punk fireworks of “Glass Teeth,” prove Corey Glover’s vocals to be stronger than ever, while Vernon Reid, long acknowledged as one of the most creative guitarists in modern rock, lives up to his reputation on album opener “Freedom Of Expression (F.O.X.)” and the soul blues of “Who’s That?” Drummer Will Calhoun—whose influences run the gamut from Elvin Jones to John Bonham—points to “Invisible,” which pays homage the late Buddy Miles, among his favorites on the album. “When we were starting out, Buddy came to every show we did in Chicago,” Calhoun says of the drummer who played with Jimi Hendrix (Band of Gypsys) and Carlos Santana. “He was a great friend of the group. Buddy Miles is such an unsung drummer who had the power of a locomotive. Buddy’s style is a thousand percent on this record.” A connecting thread between the aforementioned covers of Robert Johnson’s “Preachin’ Blues” and Biggie’s “Who Shot Ya?,” is an evocative reading of Marvin Gaye’s “Inner City Blues,” which slides seamlessly between syncopated rhythm & blues and soaring hard rock. While other veteran rockers are content with life on the road, Living Colour relish working on new material together. Shade is a testament to that spirit. Through the four members combined talent and friendship, they’ve explored the blues and its incarnations, musically as well as emotionally, and delivered an album that not only speaks to where they are as a band approaching their third decade together, but reflects back the world in these troubled times. “To me, there seems to be a shadow cast across our collective lives. We can either allow it to oppress us or we can shine a light on it,” concludes Reid. Shade is the sound of a band coming to terms with the shadows and shining a light by using the blues as a mirror.” -- Click here to buy the new album today!