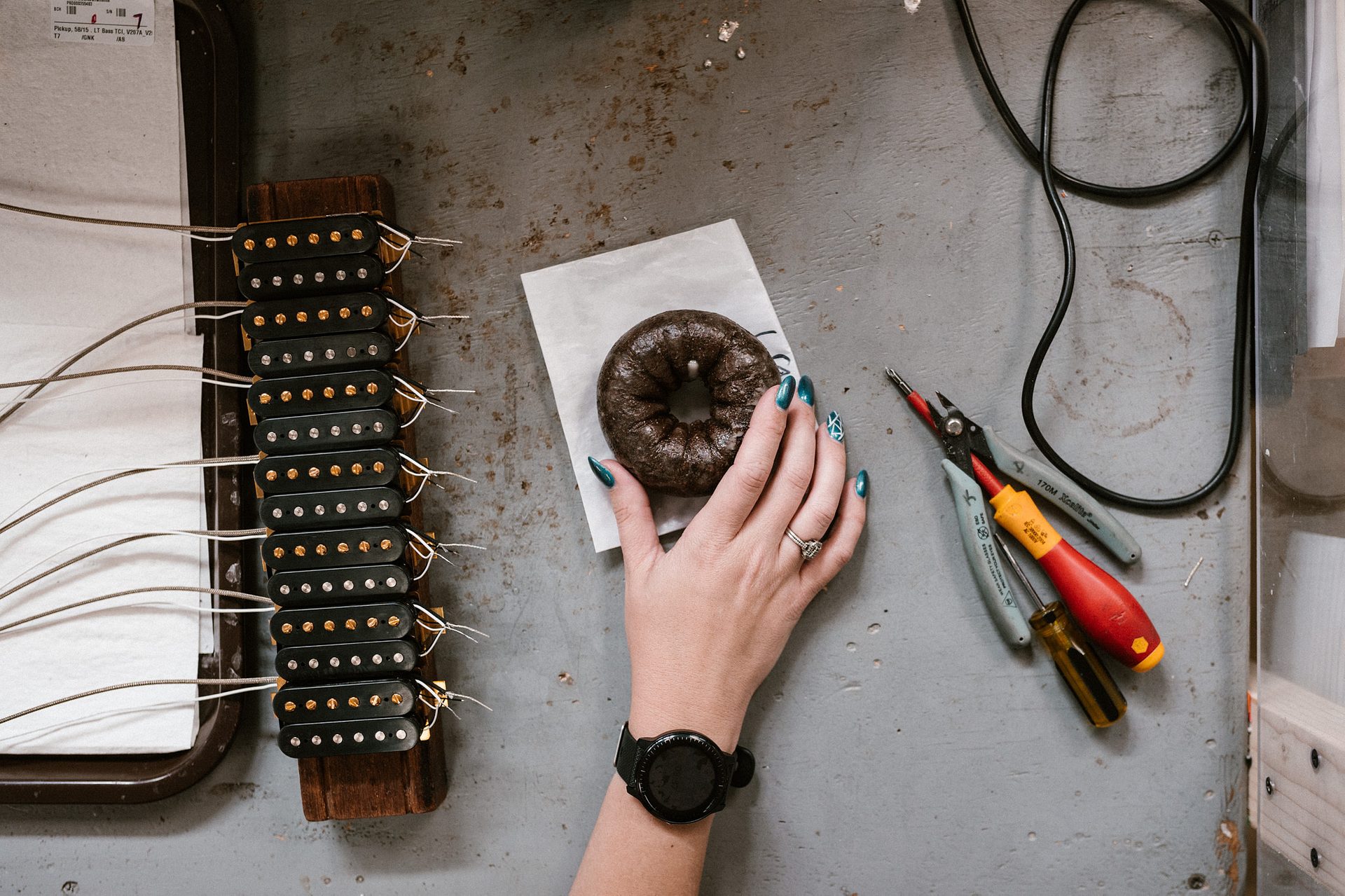 Picture this - it’s an early Friday morning and PRS employees are beginning to file into the factory and offices. Not only are they eagerly anticipating the weekend ahead of them, but a more timely treat is on the horizon— a variety of delicious freshly baked donuts are now available in their nearest break room.

216 donuts to be exact. That’s how many donuts it takes to fuel PRS power at max capacity. At PRS we source our donuts from a local business on the Eastern Shore of Maryland. If you talk to employees who have been at PRS for a while (25+ years) - they’ll tell you that this Friday tradition isn't new. So that’s what we did, we interviewed a handful of long-time PRS employees to get the scoop on how ‘Donut Friday’ began and how it continues today.

Tim, Katie, Geoff and Marc have all been at PRS for over 25 years and represent a wide range of jobs, from sales to IT and marketing. Below they answered our interview questions!

THE HISTORY OF DONUT FRIDAY

What is the first instance you remember of PRS buying treats for employees?

Geoff: My very first memory from the 80’s was when we had a party to celebrate the first guitar being shipped. I’d have to check with Paul, but I remember it was a big deal and Paul announcing that the party was going to happen as soon as the first guitar shipped. I think we may have even had picnic tables out in the parking lot!

Tim: For me it was “production meeting beers” in early 1990 - I remember my first team meeting in the finish hall. Paul would send someone out to pick up beer and I remember people saying, “grab one, pass it down.” We would not start the meeting until everyone had one. There would always be a toast at the beginning of the meeting, a “thanks for a great week” type of thing. There was a period of time when this employee Brian was getting buff from lifting weights. Paul Smith made it a point to call Brian up for a, “pose down.” (editors note: Brian is still working at PRS today, and he's still pretty buff.)

Tell us more about these daily production meetings.

Marc: When we were doing the daily production meetings the company was very, very small. Paul has always tried to share as much information with employees as possible. Back then if we picked up a new artist or a new dealer it was big news. We were also figuring out how to do all of this stuff and would try out different finishes and stains and they’d keep everyone informed. It was also a chance to steer the ship daily by discussing what worked well and what didn’t.

Tim: The production meetings were always interesting, we were updated on numbers, events that were happening, artists, international business, and any potential safety issues or concerns.

Historically, is there any special relationship between donuts / bagels and PRS employees in our company history?

Tim: In the PRS early days I was working in the Spray Room at our Virginia Ave factory. I recall individuals would solicit money from the team for a donut or bagel run. It wasn’t a factory wide thing at that point, but after money was collected I recall many times being asked to stop what I was doing and, “go pick up the bagels before break!”

Katie: The ‘collection cup’ was before my time, but when I first started in May 1990, PRS had already begun buying bagels and donuts for employees!

Did people love Donut Fridays back in the day? If so, why do you think?

Marc: Absolutely. We were all basically kids and having a breakfast treat you didn’t have to make or pay for yourself was awesome. Not to mention the fact that the bagels and donuts were from the best places in town at the time.

Katie: Of course people loved it, it was something extra! The donuts were from the best donut shop in Annapolis, ‘Carlsons Donuts’ and bagels from a real bagel shop. Back then I didn’t have much money so the donut or bagel would be my breakfast or lunch for that day. As long as I have worked at PRS, we have always had a treat at first break on Fridays - whether it was donuts, bagels, pastries, etc. Even through the tough times, PRS continued to purchase treats for the employees on Fridays for first break - at this point its PRS tradition! How many companies do know you that do this for their employees weekly?

Tim: We loved it, there was only one place where we liked to buy donuts from, Carlsons on West Street. They made the donuts fresh. You had to buy them at 5:00 or 5:30am if you even wanted a shot at getting them. Bagels were purchased from this place in Annapolis called “Bagels And.”

We asked Christie, our Director of Human Resources for the latest info on how we handle ‘Donut Friday’ today. Fun fact, this year Christie celebrated her 25th year at PRS!

Who delivers the donuts, and how many do we order?

Christie: We’ve had many different vendors in our company history, but currently we use “Fields of Heather Bakery.” We always endeavor to use a local business whenever possible! Each Friday morning they deliver 11 dozen donuts and 7 dozen muffins. Later in the day on Friday they deliver 9.5 dozen cookies for our night shift team.

How do we distribute them to every employee around the factory?

Christie: We divide them up between manufacturing and the office. We’ll grab the delivery from the front lobby and place them in all of the kitchens and break rooms around the factory so everyone has a chance to grab one.

We hope you enjoyed a small peek inside life at PRS. If you would like a donut, join the PRS team by checking out our careers page!