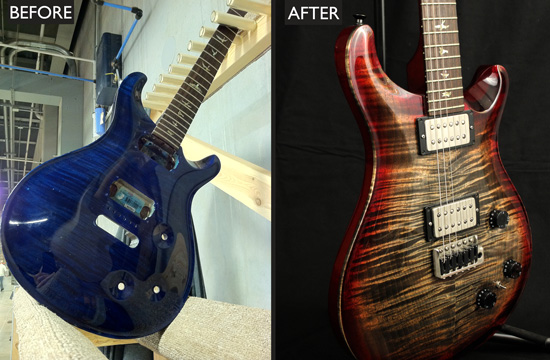 After hanging out with Shawn Nuthall at PRS Experience event and really getting a detailed idea of what exactly Paul’s Tech Center (PTC) was capable of, I asked my friend and longtime PRS endorser Emil Werstler what he thought about the idea of me replicating his now iconic guitar finish on this project. Once Emil gave me his seal of approval (since it was not a production color and at the time sprayers choice did not exist), we needed to get the blessing from the powers that be. Once that was all said and done, the project began growing and growing. Well why stop at a finish? With PTC you have a group of some of the finest luthiers and techs in the guitar industry, and if I was really going to turn this into all it could be, I would be foolish not to expand its possibilities even more. So Shawn, James and I started bouncing ideas off each other until it clicked Charcoal-Cherry Tiger Burst finish, a piezo system and some upgraded pickups. Not only were production colors much more limited at this time, the P22 Tremolo model was simply an idea on paper that people dreamed of, but we had the chance to make it happen.

The actual work phase of the guitar was my absolute favorite part of this whole experience. Since it was such an undertaking, I was lucky enough to see photos along the whole process of transforming this Custom 22 into well, a truly Custom Custom 22. First, the guitar was hand sanded to remove the original royal blue finish. As you can imagine between the clear coat and the stain that had spent years living in this wood that doing this by hand was quite an undertaking, but as with all things PRS, the key is in these details. After everything was stripped the guitar looked as if it had been a brand new guitar, which had been cut and sanded that morning.

The next stage of the process was the finish itself. A lot of PRS finishes are very detailed and this color is absolutely no exception. While I considered myself pretty aware of finish techniques, I had no idea how involved something like this was. First a charcoal base coat was laid down. It is then immediately sanded out in a strategic fashion. This step unveiled what appeared to be an amazing flame on the guitar! I couldn’t believe my eyes when this non 10-top guitar exposed these huge flames hiding under the original color. The amazing skill and execution by the finish team turned this into a top that rivaled any 10 tops I have seen. And much like your favorite dessert, the final piece of the puzzle was adding the cherry on top! The cherry stain was sprayed along the contour of the body in a burst and transitioned seamlessly into the charcoal. My only concern was the gradient between the finishes would be too hard and defined as opposed to a smooth transition you could get on raw, unfinished food. While it is hard to capture on film, the transition had been executed flawlessly. Now, I mentioned the earlier that the original color of the guitar was royal blue. Blue stains tend to bleed into the wood more than most, which makes stripping and refinishing difficult. This is where the knowledge and professionalism of the PTC came in. When we originally began speaking of the project Shawn had explained this to me in great detail and expressed a few concerns he had that stood in-between my idea and what he knew they could create. When we spoke, the natural binding of a PRS came up as a possible issue due to the original blue. Instead of getting upset or hung up on the detail, he proposed an idea that would not only eliminate the issue, but got me excited about a whole new detail that I would have never thought of stained binding! We decided to stain the binding charcoal to match the center of the top and, in turn, created one of the most notable features on the guitar. Not only was this a big deal for me, but I have seen guitars with this option created since! The final stage of finish is obviously clear coat. Owning both new and used PRS guitars, I have seen the best and worst of what can happen to a clear. After clear, this guitar looked as if it had been dipped in glass. I have NEVER seen such a flawless, shimmering clear coat on any guitar. It looked better than brand new guitars I had bought from dealers in the past!

[Click here to see how this PTC story ends]