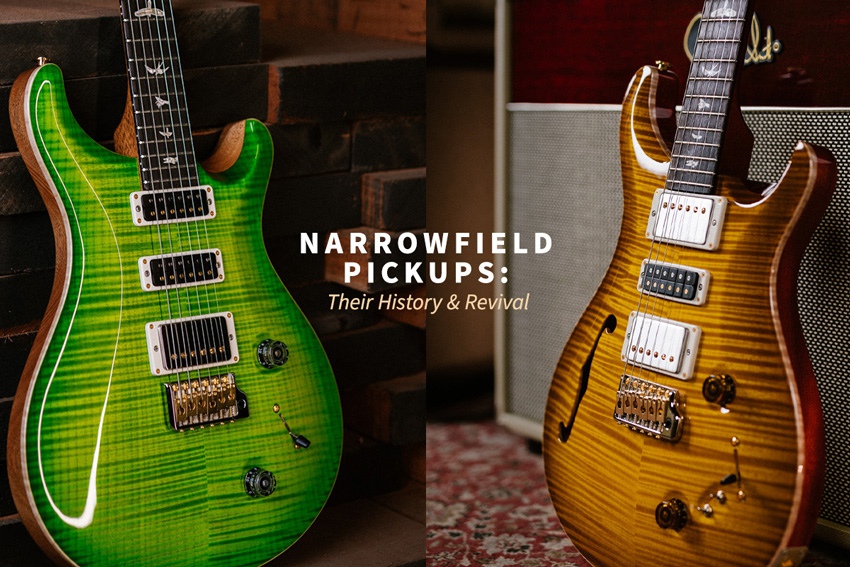 Around 2008, Paul Reed Smith and new product engineers at PRS began experimenting with a design that would soon become the PRS ‘Narrowfield’ pickup. The idea was this: take the unique tone of a well-made, great-sounding single coil and combine that with the positive characteristics of a humbucking pickup (full sound, no hum).

The resulting design contained the same general components of a ‘regular’ humbucker, but in a smaller footprint. The narrower design captures the vibration of a more focused section of the guitar’s strings, yielding a focused tone that is reminiscent of a powerful, full-sounding single coil.

^ Early prototypes of the Narrowfield pickup. The pickup pictured back right would become the final design.

After a number of prototypes and a significant amount of testing and refinement, the Narrowfield pickup was born and worked its way into PRS production models around 2010 - our company’s 25th Anniversary. Models like the McCarty Narrowfield, NF3, and Swamp Ash Special Narrowfield burst onto the scene - all featuring this new pickup design.

In addition to being narrower in design, Narrowfield pickups are ‘stair-stepped’ so that the distance from the magnet to the string remains the same across the radius of the fretboard. A small detail, but one that promotes even volume across the strings for a more balanced tone.

After being out of the PRS catalog for a few years, for 2021, we’re excited to reintroduce Narrowfield pickups (now with our TCI treatment

The PRS Special Semi-Hollow offers players a versatile hum/ “single”/hum configuration with two PRS 58/15 LT humbuckers and a PRS Narrowfield middle pickup. As we intended with the Narrowfield design, the pickups cut through the mix with plenty of clarity and punch – without the hum. Paired with a 5-Way blade switch and two mini-toggles that tap the 58/15 LT humbuckers, this guitar can handle myriad sounds and styles (with twelve pickup combinations in total). Roll back the tone control for added growl, turn it up for some shimmer, and have fun exploring this versatile tonal palette.

Additional specifications include a maple top, mahogany back, 22-fret 25” scale length mahogany neck, rosewood fretboard, Phase III tuners, and PRS Gen III patented tremolo. The volume levels between the humbucking and single-coil settings remain very even, and the semi-hollow body with single f-hole provides a welcome airiness and depth to the guitar’s tone.

Here’s a closer look at how the switching system works:

Below, have a listen to the Special Semi-Hollow in our product demo:

The PRS Studio model is a modern take on a traditional single-single-hum guitar. With the proprietary Narrowfield pickups in the middle and bass positions and a 58/15 LT humbucking bridge pickup, the PRS Studio offers punchy singlecoils, vintage scooped tones, and the chunky kick of a bridge humbucker screaming in one instrument. This whole new scope of sounds (that are only possible with a three-pickup guitar) are easily accessible in the Studio model thanks to the push/pull tone control and 5-way blade switch. With seven combinations in all, the PRS Studio covers classic tones but maintains a unique voice making it a perfect “desert island” guitar.

Here’s a closer look at how the switching system works:

Below, have a listen to the Studio in our product demo:

LEARN MORE
← Back To Blog