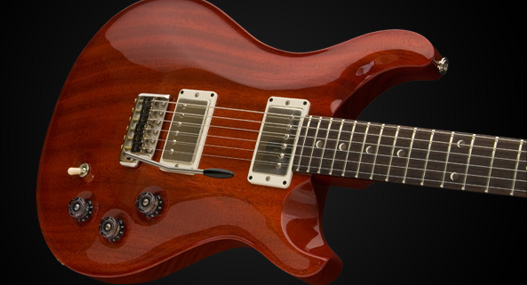 On February 17th, PRS Guitars introduced a new take on the popular DGT (David Grissom Trem) model – the DGT Standard. This all-mahogany version of Grissom’s signature model maintains many of the features unique to the DGT, including Grissom’s signature neck shape, slightly larger frets and heavier strings, tremolo capability, and specially designed DGT pickups with individual volume controls. Grissom’s original PRS signature model has been one of PRS Guitars’ most popular artist models since its introduction in 2007, so this special edition should come as no surprise for fans of the Maryland-based company.

"The DGT Standard has been in the works for the last year, and I’m really excited PRS is doing a run of these guitars. My first PRS was an ‘85 all-mahogany Seafoam Green Standard, so this guitar brings everything full circle for me. All-mahogany guitars are more focused in the mids as a general rule and have a nice chime and growl as well. Paul and I agreed that doing an all-mahogany DGT was the ideal way to get a great variation on my signature model without sacrificing any of the soul and features of the original. I have to say that PRS hit it out of the park once again!," said David Grissom.

Austin-based guitarist David Grissom made his debut as Joe Ely’s lead guitarist in the mid Eighties. His on stage and studio resumes include stints with rock legend Ringo Starr, blues icons Buddy Guy and John Mayall, roots rockers John Mellancamp and Chris Isaak, and country headliners the Dixie Chicks and Brooks & Dunn, and even a brief period as a member of the Allman Brothers Band, where he replaced Dickey Betts. This diverse portfolio has allowed Grissom to simultaneously maintain a bold, distinctive voice while perfectly complementing the artists he accompanies.