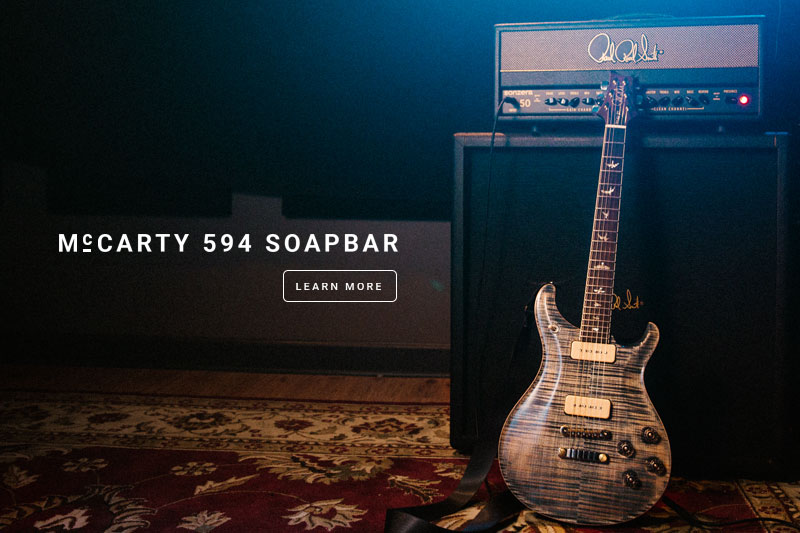 PRS Guitars is proud to offer the acclaimed McCarty 594 and McCarty Singlecut 594 with PRS/Seymour Duncan Soapbar pickups for a limited time. McCarty 594 models were designed to rival the best vintage instruments, meticulously spec’d with a 24.594” scale length, Pattern Vintage neck carve, tweaked Phase III locking tuners with modified collars and set screws, and a two-piece zinc bridge. Soapbars are one of the most classic pickup designs and add another tonal option for players that is at once incredibly familiar and effortlessly playable.

“There are a lot of folks out there, myself included, who absolutely love the sound of a good P90 soapbar – they have all the character of a singlecoil with a bit more heft. The PRS/Seymour Duncan soapbars in these models have nice bite and grind, single notes are sweet and clean but still have plenty of heft to them, and they are very responsive to where you pick on the string,” stated recording artist and PRS Product Specialist, Bryan Ewald.

For this PRS/Seymour Duncan collaboration, PRS started with the Seymour Duncan Antiquity P90 for its sweet, vintage growl and cool, gritty sparkle. The pickup was modified slightly so it sits at the proper height in PRS’s cavity design. Like with original Antiquity pickups, chords sound full and round, while single notes sing sweetly. A relatively low output pickup; these soapbars have a many usable voicings by simply adjusting your volume and tone controls.

There is no limit to the number of McCarty 594 Soapbar guitars that will be made, but the order window is open from July 11 – August 31, 2017 only through authorized PRS dealers and distributors.

To hear the McCarty 594 Soapbar models, check out the following videos: