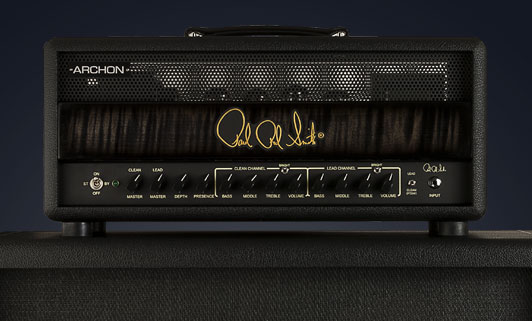 In the world of high-gain amplifiers, modern players demand aggressive overdriven tones and ample headroom with sparkling cleans. The new PRS Archon amplifier offers all of the above in a high-design 100/50-watt package (via a half-power switch). Greek for “ruler” or “lord,” the Archon has already earned the endorsement of several top artists, including Dustie Waring (Between the Buried and Me), Fredrik Åkesson (Opeth), Mark Tremonti (Alter Bridge and Creed), Emil Werstler (Chimaira), and Zach Myers (Shinedown).

The Archon’s lead channel was designed with five gain stages before the master volume, delivering full, lush distortion, or as Frederick Åkesson of Opeth describes it, “a warm, punchy gain.” The clean channel provides ample headroom with rich clear tones that retain clarity even at high volume and are an excellent platform for pedals. Utilizing a ‘no flash or trash’ approach, the Archon’s control layout features volume and tone controls for each channel, a global depth control to add a thunderous low end, and a presence control to effect the high end chime. A footswitch controls effects loop bypass and channel selection.

“Finding the right amp can be a life-long journey. There always seems to be an imperfection in design covered up by excess features. For the multi-genre player, it is nearly impossible to find one amp for all styles until now. The Archon delivers the best clean and dirty channels I've ever heard in one amp. Finally, I get to just plug in and play,” Emil Werstler, Chimaira.

Features and specifications include:

The PRS Archon, officially announced in December of 2013, will be a featured product at the 2014 Winter NAMM show. For full specifications, sound clips, and demo videos, visit www.prsguitars.com/archon.