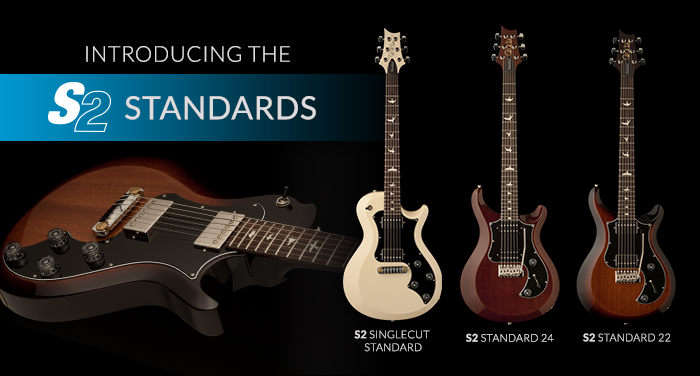 Known for its warm, woody tone, mahogany provides the S2 Standard models with a strong fundamental that has been built on to create guitars that play as well and sound as good plugged straight into an amp or run through a modern pedalboard setup. The set neck adds to the tone of these guitars by providing remarkable resonance and lasting sustain while the addition of PRS-designed pickups and push/pull tone controls gives players access to authentic singlecoil sounds in addition to strong, punchy humbucker tones.

The only 24-fret model in the lineup, the Standard 24 is a classic PRS reimaged for players who prefer a stripped-down approach to their music. The Standard 22 goes in a more vintage direction, but remains a bare-bones workhorse for the player who needs to cover a lot of ground with their music. The Singlecut Standard boasts a classic body shape and control layout, with volume and tone controls for each pickup and a 3-way toggle pickup switch on the upper bout, giving payers plenty of options to dial in flawless tone.

As with all S2 Series guitars, the Standard models feature S2 locking tuners, PRS-designed bridges, as well as PRS nuts, frets, and strings. This means PRS fit, finish, and attention to detail all at a more affordable price. With solid build quality and versatile electronics platform, the S2 Standard lineup can effortlessly go from high gain punk and metal to low, bassy blues, making these guitars a solid choice for players who prefer a straightforward approach to a variety of different musical styles.