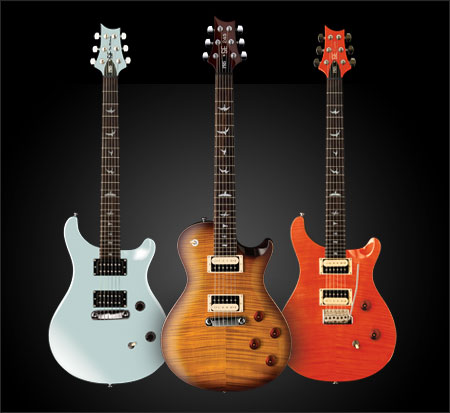 Whether it’s the newest signature model SE from 311’s Tim Mahoney, the new SE 245 with pickups optimized for its shorter 24.5” neck or the introduction of bird inlays to the SE Custom 24, SE Singlecut, SE Custom Semi-Hollow, and SE Singlecut Trem, the SE line continues to push the quality envelope. Gigging musicians are relying on SEs to deliver rich tones and a wide variety of sounds.

With all new SE 245 pickups, a thicker single cutaway body for increased resonance, the PRS-designed stoptail, and the 4-knob layout offering a multitude of tonal options, the new SE 245, like many others in the SE line, allows players to easily adapt to a variety of musical styles.

Based on the model that started it all 26 years ago, the SE Custom 24 is a show-stopping instant classic. Boasting a beautiful flamed maple veneer top and SE versions of PRS's ever-popular HFS Treble and Vintage Bass Humbuckers, the SE Custom 24 is now being offered in Orange and Tri-Color Sunburst. As follow-up to the 25th Anniversary version which debuted in 2010, the SE Custom now comes standard with birds as well.

Offering the same mahogany body, maple top, and flame maple veneer as the popular SE Singlecut, the newest version of the SE Singlecut Trem features a PRS designed tremolo bridge and is now offered in Scarlet Red and Black with bird inlays. A 22-fret, wide-fat mahogany neck with rosewood fretboard accentuates the instrument’s rich tones, and the PRS-designed treble and bass humbuckers offer a multitude of sounds for players of every style.