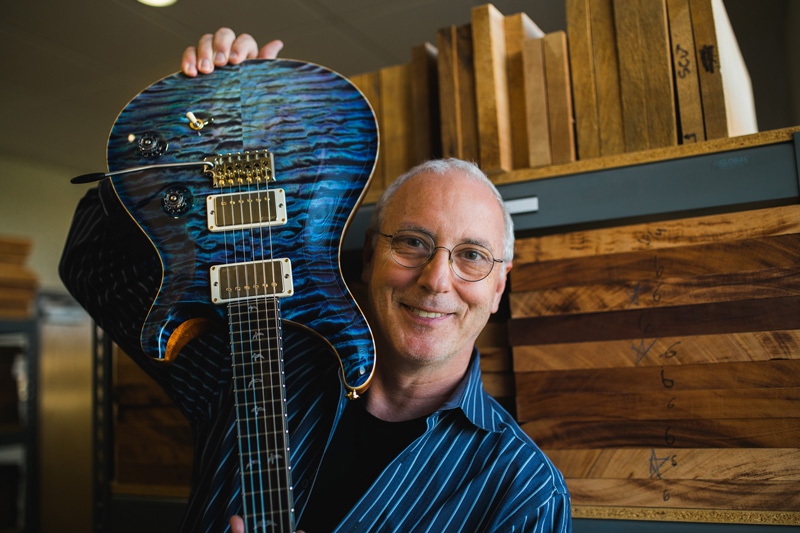 This Summer, PRS Guitars’ founder and Managing General Partner, Paul Reed Smith and the legendary Grainger Brothers will fulfill a lifelong dream at Maryland Hall: opening a music school for aspiring musicians. The Music Master Classes for Aspiring Musicians is a 6-day music intensive for ages 12 to 100. Session Directors Greg Grainger, Gary Grainger, and Paul Reed Smith – along with special guest teachers and artists including Dennis Chambers – will guide aspiring musicians through a legendary week of Master Classes this August 19-24.

Open to all skill levels and instruments, the Master Classes will delve into three main tracks: Rhythm, Harmony, and Melody. Students will learn from professional musicians, grow their knowledge of music, gain hands-on experience and expand their skillsets. The 6-day event includes 5 days of Master Classes and a final Performance Showcase Day. The Showcase will feature some of the students who have shown skills, growth, and dedication.

The Paul Reed Smith Band, of which Smith and the Grainger Brothers are members, introduced their Master Class model at Maryland Hall last December. Young guitarist Nathan Wickham of the band Annapolis Revival said of the experience, "Paul Reed Smith’s emphasis on rhythm made a lot of sense with the lessons he gave. Thank you!" Other feedback included, “Master class was excellent. Can’t wait until the band has another one!,” “Loved the class and the interaction with the band!,” and “The master classes were terrific. Can’t wait until the band does it again!”

Paul Reed Smith is committed to mentorship both within PRS Guitars and throughout his life as a recording artist. While the Maryland Hall Master Class Program is a new offering, Paul and the Grainger Brothers have been teaching music in schools for over 20 years. With Assemblies and Motivational Clinics at Severn High School, Bowie High School, Washington College, and numerous other schools and facilities, Paul continues to “give back” and teach area youth whenever he can.

Smith is an internationally known guitar maker, guitar player, and the founder of PRS Guitars. In addition to performing and recording with his own band, Paul has played with artists such as Vertical Horizon, Creed, and Santana. He was honored by Vintage Guitar Magazine as a Hall of Fame inductee 2011 and was named Maryland’s Small Business Owner Person of the Year in 2002.

Gary Grainger’s seamless approach to virtually any style of music makes him one of the most sought-after bass players in the world. He has performed and done countless recordings, tours, and TV appearances with such notable artists as John Scofield, Dennis Chambers, Nancy Wilson, Roger Daltrey, Rod Stewart, Nick Lowe, Nelson Rangel, George Duke, Acoustic Alchemy, and Eric Marienthal.

A skilled architect of rhythm, Greg Grainger is surprisingly fresh in his artistry and musical perspective. Upon hearing him, it is easy to see why Whitney Houston signed him for her 1988 world tour, why Britain’s Rhythm Magazine called his work “solid and tasteful” dubbing him a “rhythm master” and why he is the drummer for international jazz artists such as Acoustic Alchemy and Kim Waters along with being the drummer and Musical Director for Maysa (the voice of Incognito’s Deep Waters and A Shade of Blue).

Chambers is an American drummer who has recorded and performed with John Scofield, George Duke, Brecker Brothers, Santana, Parliament/Funkadelic, John McLaughlin, Niacin, Mike Stern, CAB, Greg Howe, and many others. He was inducted into the Modern Drummer Hall of Fame in 2001. Despite a lack of formal training, Chambers has become well known among drummers for his technique and speed. Chambers is particularly regarded for his ability to play "in the pocket." He has helped many young drummers, the most prominent being Tony Royster, Jr. Chambers began drumming at the age of four and was gigging in Baltimore-area nightclubs by the age of six.

Mia has a beautiful multifaceted voice that got its start in church gospel at a very young age. She has over 35 years of experience in gospel, R&B, and rock music. After two recording sessions, she was hired by the Paul Reed Smith Band.