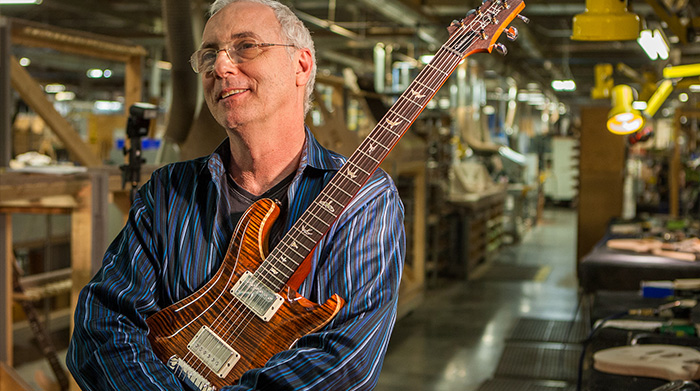 PRS Guitars is proud to announce that Paul Reed Smith has been awarded the Music and Sound Retailer Magazine Lifetime Achievement/Hall of Fame Award. Every year for 28 consecutive years, The Retailer’s large community of musical instrument dealers are asked to nominate a distinguished innovator whose musical contributions have achieved elevated levels of acclaim and respect within the musical community.

“I like to challenge my company to bring the best products to market that we can in an effort to provide excellent tools for musicians,” said Paul Reed Smith. He continued, “I hope that our commitment in that regard is one reason for this award. When I look back on 1985, and then I look around the NAMM show now, I can see our influence on the industry. I know it’s been almost 30 years, but it doesn’t seem that long. To Vinny Testa and everyone at The Retailer, thank you!”

PRS also won The Retailer’s Best Electric Guitar of 2013 award for the Maryland-made S2 Custom 24. When presented with the award, Smith stated, “I am proud of the great team effort that went into the S2 series. It is hard to recall another project that was treated with such enthusiasm. This has also been one of the most aggressive launches in PRS history.” The S2 Series offers the fit, the feel and the attention to detail known from the craftsmen of PRS in a more accessible price point. This new series has drawn the attention of guitarists and guitar collectors across the globe and has produced four to five months of advanced orders that PRS craftsmen are rallying to fulfill.

Another big win for PRS was the Best Bass Guitar of 2013, where dealers selected PRS Guitars’ Gary Grainger 5-String Bass. Smith remarked, “When I got the news and saw the award for the Gary Grainger Bass, I felt very emotional about it because Gary and everyone at PRS put twelve years into that bass to make it right. We are not known first as a bass manufacturer, which makes this award even more special.”

To see the article online, please visit http://viewer.zmags.com/public... or check out the March 2014 issue of Music &Sound Retailer currently on newsstands.