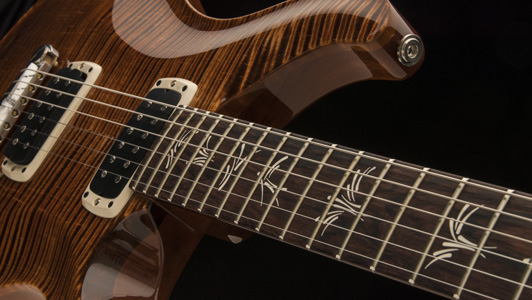 For 2013, PRS Guitars is introducing “Paul’s Guitar” and “Paul’s MDT” amplifier – both designed to Paul Reed Smith’s exacting specifications and built to match his own gear. Paul Reed Smith has the unique position in the music industry of being a skilled guitarist in addition to founding a major guitar manufacturing business. His name is on the headstock, and he can play. The company has a foundation that was laid from Paul’s experience as a skilled guitar maker and musician and continues to grow based upon his experiences in the studio and on the stage.

“These guitars have a highly musical tone and beautiful new look that I love,” said Paul Reed Smith. Carrying on the Modern Eagle tradition, Paul’s Guitar is a production version of the Private Stock guitar Paul Reed Smith has been playing in his studio and on the stage. With exclusive “brushstroke” bird inlays and two narrow 408 pickups, this guitar is not only unique….its every appointment has been specified by Paul Reed Smith from the wood selection, inlay design, pickups, neck shape, a new proprietary finish, and newly designed stoptail bridge. “We’ve been experimenting with a new stoptail bridge with brass inserts that will first be seen on this model. The bridge is still our aluminum straight bridge, but the point at which the string starts vibrating, it’s brass to promote the musical high-end of the guitar,” said Paul.

For players and aficionados the world over, Paul’s Guitar and Paul’s MDT from PRS are sure to inspire. For more information and full specifications, please visit: