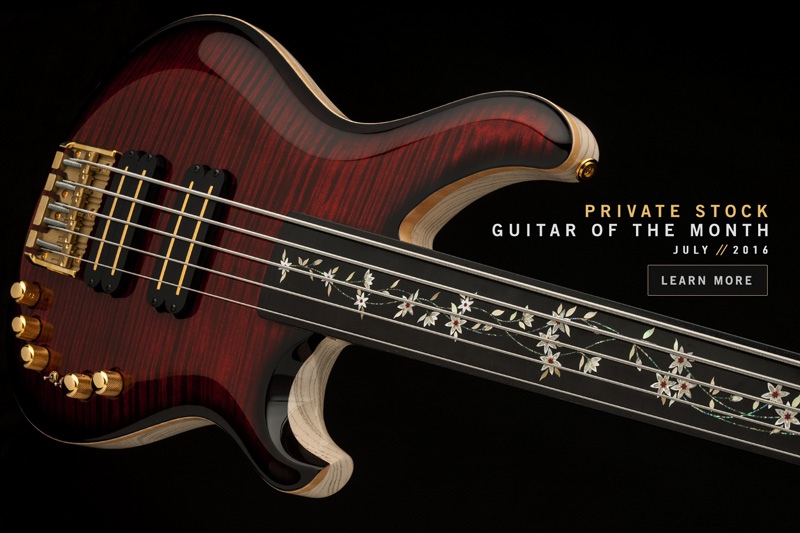 PRS Guitars is celebrating the 20th Anniversary of Private Stock with a revival of the program that started it all: Guitars of the Month. Each month in 2016, the Private Stock team will be offering a unique design in limited numbers that will highlight the fine craftsmanship and remarkable playability that the Private Stock team is known for while utilizing some of the most deluxe materials available. For July, PRS is releasing a Grainger 5-String Fretless Bass. Gary Grainger (John Scofield, Dennis Chambers, Frank Gambali, Nancy Wilson, etc.) often refers to his signature PRS basses as “works of art and great tools for working bassists.” This special edition, based on a Grainger 5-String made for Alex Al (best known for his more than decade-long career with Michael Jackson), celebrates that marriage of art and function with its elegant Tree of Life inlay, fretless design, and versatile Grainger electronics. Only six of these instruments will be made for July 2016.

“Alex has played with everyone from Stevie Wonder, Sting, Paul Simon, Joni Mitchell, and Taylor Swift. We made a 5-string Grainger bass for him with a beautiful Tree of Life inlay. When the bass was done, it was just exquisite,” said Paul Reed Smith. “Looking at and playing the July Guitar of the Month bass, that was inspired by the Alex Al bass and discussions with him about a fretless version, I think it fits this program perfectly because this is not only a work of art, it is fit for a Grammy-worthy recording or for a world tour performance.”

The original Guitars of the Month were cased between December 1994 and March 1996. They provided the opportunity to experiment with new ideas and led directly to the creation of the Private Stock program, with the first “official” Private Stock instrument casing on April 19, 1996. Paul Reed Smith has been leading the department for the last several years, driving innovation, quality craftsmanship, and unparalleled attention to detail.

“Private Stock is very special to me. It is an amazingly passionate team working with our most treasured materials and new designs. These craftsmen are building heirloom quality pieces of art that play and sound as good as any guitar I have ever played. I am very proud to be celebrating 20 years of Private Stock with the Guitar of the Month program,” Paul Reed Smith.

To see this guitar and to learn more about the 20th Anniversary Guitars of the Month program including a list of dealers and distributors that offer PRS Private Stock instruments, click here!