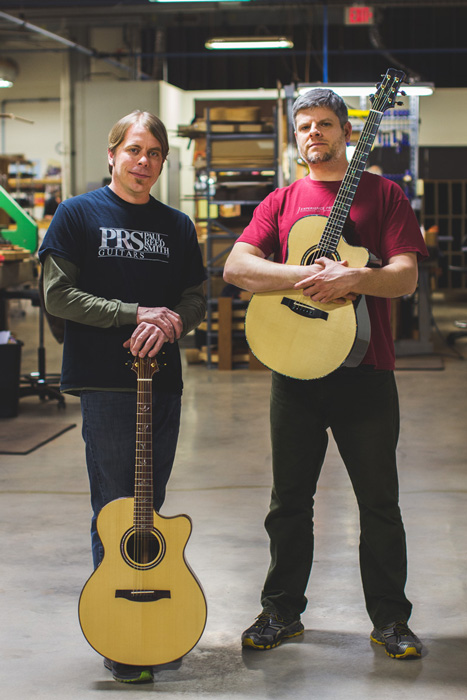 The PRS Guitars acoustic department, now in its fifth year, has officially aligned more directly with the company’s Private Stock program. The PRS acoustic team, a small group of nine people, continues to largely handcraft instruments at exclusive numbers under the company’s Private Stock brand. Accordingly, Paul Miles, twenty-three year PRS veteran and Director of Private Stock, has expanded his responsibilities beyond the Private Stock electric team and the PRS Tech Center to include the management of PRS acoustic production. In concert with Miles, PRS’s acoustic department will continue to be guided by the artistic vision and talent of Senior Acoustic Luthier Michael Byle. Byle has been with PRS Guitars for fifteen years and will now have increased latitude to explore innovative manufacturing processes, handpick material selections, and lead the team’s continual training efforts.

In his expanded role, Miles will continue to report directly to PRS Managing General Partner, Paul Reed Smith with Byle reporting to Miles as Senior Acoustic Luthier. In addition to his hands on approach to production and his interaction with PRS’s signature acoustic artists Martin Simpson, Tony McManus, Cody Kilby, and Alex Lifeson, Byle has stepped up as a spokesperson for the company’s acoustic steel and nylon string guitars by presenting the instruments at guitar festivals including the Woodstock Luthiers Invitational Showcase.

Commenting on the appointments, Paul Reed Smith said, “I have known Paul Miles and Michael Byle for years, and I am delighted to support both of them in these positions. Our acoustic team is pretty unique. It’s a small crew, so the team’s craftsmanship really shines through. With this year’s earlier addition of Jon Croft as Acoustic Sales Manager and Paul and Michael helping to lead the team, I think we will continue to see great things from PRS Acoustics.”

Through the last five years, PRS acoustic instruments have made their way into musicians’ and guitar enthusiasts’ hands where they can be seen on stages and in collections across the globe. In addition to PRS signature acoustic artists, PRS is proud to have Ricky Skaggs, Mike Eli (Eli Young), Shannon Curfman (Kid Rock), Brian Craddock (Daughtry), Dave Weiner (Steve Vai), and Zach Brown playing its gear. Under the direction of Paul Miles, Jon Croft, and Michael Byle, the department will continue to develop and PRS acoustic instruments, which are made from the finest tone woods in PRS’s possession and feature a patented bracing system that allows guitars to ring out with exceptional tone and clarity.