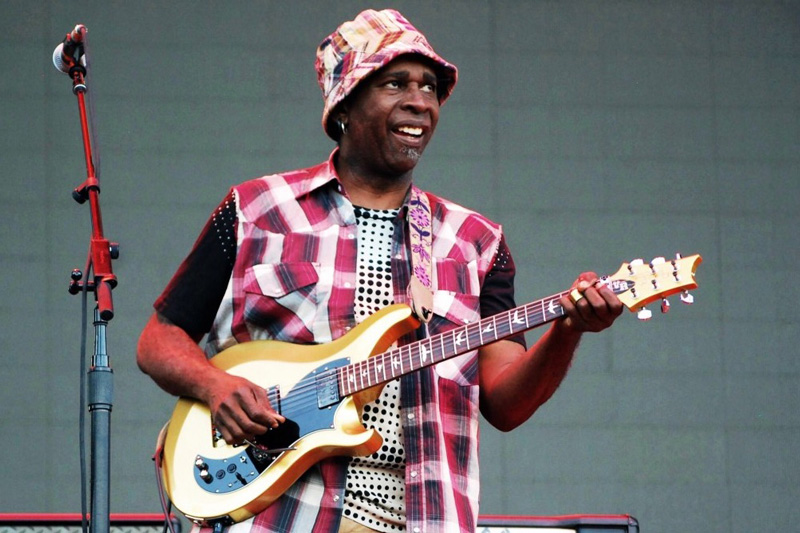 On September 23, The National Museum of African American History and Culture opened at the Smithsonian with a three-day, two-night festival near the Museum that transformed a corner of The National Mall and rocked with the sounds of The Roots, Public Enemy, and Living Colour, featuring PRS guitarist and Black Rock Coalition Founder Vernon Reid.

Starting with an inauguration by President Obama, the opening ceremonies launched into full force with music, noted speakers including former President George W. Bush, Oprah Winfrey and Will Smith, and tours of the 400,000 square foot building dedicated to the history and culture of African Americans.

PRS recently caught up with Vernon Reid to ask him about the new museum and his views on African Americans and the music industry. Here’s how the conversation went:

PRS: How do you feel about the grand opening of the National Museum of African American History and Culture?

VR: I couldn't be happier or prouder for Living Colour to be a part of the grand opening of the national Museum of African-American history.

PRS: You’ve witnessed many changes in the music industry over the years. Can you describe how African American music has evolved in that time?

VR: Describing the evolution of African-American music throughout history in a few words is a very difficult thing to do, but in broad strokes I would say that African-American music has innovated on all fronts - essentially the invention of American popular music. From earthy blues which began in the pain & suffering of bondage to the semi-liberation of the Great Migration to the industrial cities of the Northeast, the Midwest, & West. The many changes of Jazz, which incubated in the parishes of New Orleans to evolve into the multiplicity of styles currently played now. The invention of Rock & Roll, that precocious child of Blues. The children of the children of the Great Migration got together with second generation Caribbean Americans to invent Hip-Hop. Rhythm & Blues & Soul in the post WWII era came out of cities like Detroit, Memphis, & Philadelphia. Hendrix can't be fully comprehended without seeing him as an outgrowth of African American History's many cross-currents.

VR: Like everywhere else in society I see changes, yet feel frustration. Guitarists like Gary Clarke Jr. and "Captain" Kirk Douglas, artists like TV On The Radio and The Suffers fill me with pride and hope, but it still feels like it’s a struggle fought on the margins for recognition. In example, my friend William Duvall, an African American, is the current lead singer for Alice In Chains. I applaud Jerry Cantrell for having the guts to ask William to do it in the first place, & the courage of both of them to stick it through. They faced a lot of opposition to the choice in the beginning. The part of that opposition that just misses Layne Staley as a great singer & front man doesn't bother me. I was a fan of Layne's and feel that his passing was tragic. The part of the opposition to William based essentially on racial grounds is problematic for me. Big time. The only answer is grit, perseverance, and time. Which moves slower than I like. Change is hard. We can see that on the news. EVERY DAY.

PRS Guitars is proud to support a number of African American guitarists and bassists, including:

For more information on the new National Museum of African American History and Culture, click here.