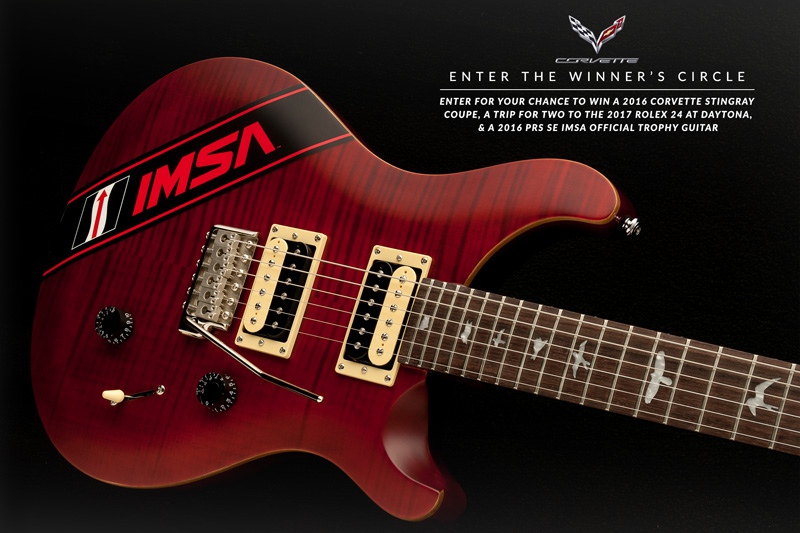 As part of PRS Guitars’ seventh season as the exclusive guitar and amplifier of International Motor Sports Association (IMSA), PRS is teaming up with Chevrolet Motorsports on a season-long sweepstakes that will give one Corvette Racing fan the experience of a lifetime. Effective March 3, 2016 fans can enter for their chance to win an official 2016 PRS SE IMSA Trophy Guitar specially made for WeatherTech Championship races and awarded in Victory Lane, a 2016 Corvette Stingray Coupe, and a trip for two to the 2017 Rolex 24 At Daytona race.

Entries for the Race to Win Corvette sweepstakes will be accepted through the 2016 IMSA WeatherTech SportsCar Championship Season, ending on October 4, 2016. To enter for your chance to win this amazing guitar, Corvette, and race experience, visit www.RaceToWinCorvette.com.

Open to legal U.S. residents currently residing in the 50 United States and D.C. who are at least eighteen (18) years of age or the age of majority in their state of residence, whichever is older, as of the date of entry. The “Win the 2016 Corvette Stingray Coupe” sweepstakes runs from March 3 to October 4, 2016. Limit one entry per person during the Promotion Period. Odds of winning will be based on the number of eligible entries received. For complete details and Official Rules, please visit https://www.chevrolet.com/rolex-24-sweepstakes.html. Void where prohibited. No purchase necessary. Sponsor: General Motors LLC, 100 Renaissance Center, Detroit, MI 48265. Administrator: HelloWorld, Inc., 3000 Town Center, Suite 2100, Southfield, MI 48075