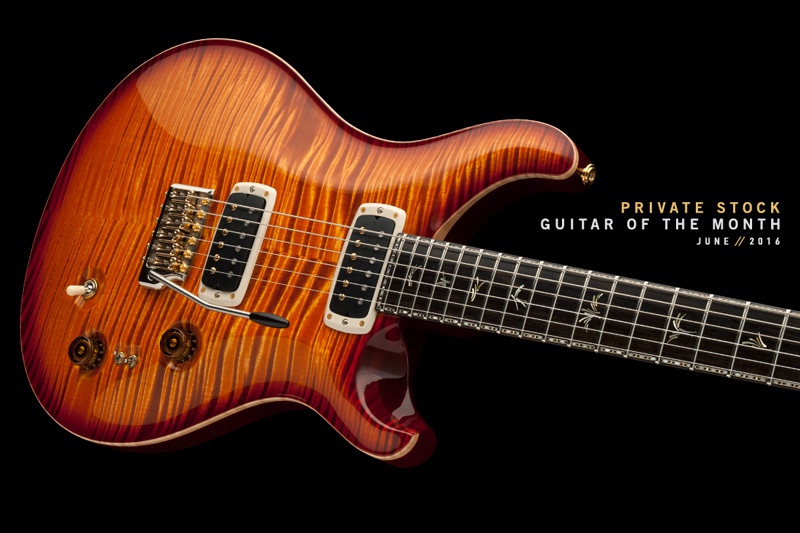 PRS Guitars is celebrating the 20th Anniversary of Private Stock with a revival of the program that started it all: Guitars of the Month. Each month in 2016, the Private Stock team will be offering a unique design in limited numbers that will highlight the fine craftsmanship and remarkable playability that the Private Stock team is known for while utilizing some of the most deluxe materials available. For June, PRS is releasing a Paul’s Guitar model. Personally designed and appointed by Paul Reed Smith, Paul’s Guitar is a highly musical instrument that features two 408N treble and bass pickups and a versatile coil tap system. This Private Stock edition features slightly modified brushstroke bird inlays and “Strad” purfling along the fingerboard, headstock, and truss rod cover. Only ten of these instruments will be made for June 2016.

“When Private Stock built the first Paul’s Guitar, I knew we had something special that I would be playing for a long time. I really liked the newly designed brushstroke birds, and the new single coil toned 408 pickups. Now I could get with my guitar exactly what I was shooting for…a big fat sound that was wonderfully clear combined with a super resonant guitar which I loved.” said Paul Reed Smith.

The original Guitars of the Month were cased between December 1994 and March 1996. They provided the opportunity to experiment with new ideas and led directly to the creation of the Private Stock program, with the first “official” Private Stock instrument casing on April 19, 1996. Paul Reed Smith has been leading the department for the last several years, driving innovation, quality craftsmanship, and unparalleled attention to detail.

“Private Stock is very special to me. It is an amazingly passionate team working with our most treasured materials and new designs. These craftsmen are building heirloom quality pieces of art that play and sound as good as any guitar I have ever played. I am very proud to be celebrating 20 years of Private Stock with the Guitar of the Month program and the Paul’s Guitar model” Paul Reed Smith.

To see this guitar and to learn more about the 20th Anniversary Guitars of the Month program including a list of dealers and distributors that offer PRS Private Stock instruments, click here!