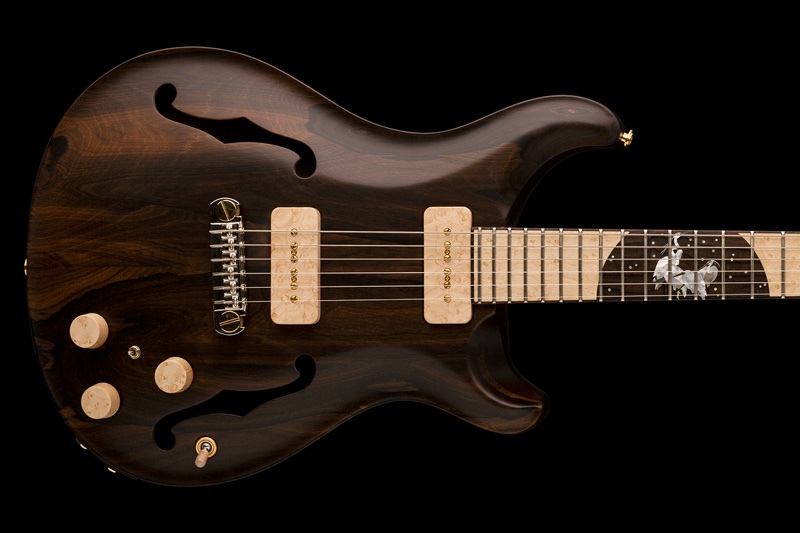 PRS Guitars, the third largest US electric guitar manufacturer with instruments played by musicians as diverse as Carlos Santana, Mark Tremonti, John Hiatt, Mark Holcomb, and John Mayer, has been celebrating the 20th Anniversary of their Private Stock department this year with the return to the program that started it all: Guitars of the Month. Each month in 2016, the Private Stock team has delivered a unique design in limited numbers, highlighting the detailed craftsmanship and exquisite materials that define Private Stock.

For December, the twelfth and final 2016 Private Stock Guitar of the Month closes Private Stock’s 20th Anniversary celebration with vigor. In a limited run of only 12 pieces, the Ziricote Hollowbody II Piezo celebrates the beauty and artistry of nature with exquisite wood species and a winter wildlife inlay. In keeping with this theme, Private Stock has included a number of unique appointments for the December Guitar of the Month, including custom “Winter Egrets” inlays on the fingerboard and headstock veneer consisting of solid white, gold and black lip mother-of-pearl and black corian, mother-of-pearl “December” engraved banner as well as mother-of-pearl side dots, and P-90 treble and bass pickups with Birds-eye maple covers. The instruments’ unique ziricote top and back is finished with natural satin nitro.

Only twelve of these instruments will be made for December 2016, commemorating Private Stock’s 20th Anniversary.

“Revisiting the Guitars of the Month program to celebrate Private Stock’s 20th Anniversary has been a joy,” stated Paul Reed Smith of PRS Guitars. “I encourage everyone to visit the website to see all twelve models. While each instrument is a testament to the Private Stock team’s dedication to design, innovation and craftsmanship, seeing all twelve of these very limited edition instruments together as a group, is really something special to behold.”

The original Guitars of the Month were built between December 1994 and March 1996. They provided the opportunity to experiment with new ideas and led directly to the creation of the Private Stock program, with the first “official” Private Stock instrument shipping on April 19, 1996.

To learn more about this guitar and the 20th Anniversary Guitars of the Month program, including a list of dealers and distributors that offer PRS Private Stock instruments, click here!