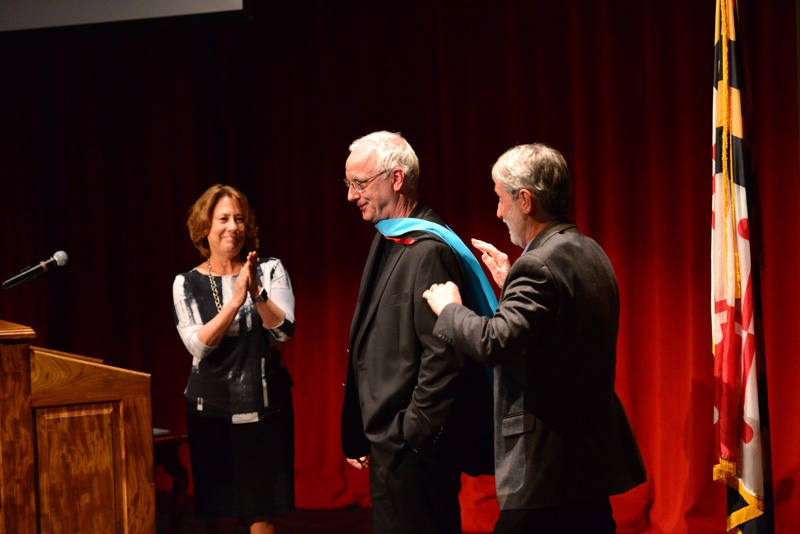 Paul Reed Smith, founder and Managing General Partner of PRS Guitars, has received an Honorary Doctorate of Public Service from Maryland’s Washington College. The degree, which was in recognition of Paul’s significant achievements as an innovative and creative thinker, was presented to Smith by Washington College President Sheila Bair during a public ceremony on Thursday, April 13.

Paul was recognized for both PRS Guitars, his successful business that has been designing and manufacturing electric guitars and basses, acoustic guitars, and amplifiers for some of the world’s most prestigious musicians for more than 30 years, and also his new cutting-edge company: Digital Harmonic, LLC, which marries art and science with developed image and waveform technology.

“Paul is a remarkable example of entrepreneurial spirit; a kid builds a guitar in high school woodshop and ends up as Managing Partner and Founder of the third largest guitar manufacturer in the US. Many would tell you that the company makes the best electric guitars that have ever been made,” said George Spilich, a professor of psychology and director of the Cromwell Center for Teaching and Learning at Washington College who treasures his own PRS guitar. “Now Paul is taking his expertise in signal processing and pivoting that knowledge into the creation of a signal processing company that has the promise of greatly improving medical imaging. If all that does not merit recognition in the business world, I don't know what does.”

“I am very appreciative to be recognized by the Department of Business Management at Washington College,” said Paul Reed Smith. “I hope it serves as inspiration to the students, that regardless of where you start, things are possible with determination, a plan and great work ethics.”

Aside from Smith’s professional success, he is also dedicated to giving back to the community through PRS Guitars’ fundraising efforts for the Johns Hopkins Kimmel Cancer Center Living with Cancer program and his mentorship program, which he personally has delivered at dozens of area secondary schools and colleges including Washington College. The mentorship program, which is largely funded by Smith himself, focuses on achieving goals and dreams through positive work ethics and responsibility. Paul is convinced that if he can reach even one student at each program that it is worth his time and effort.