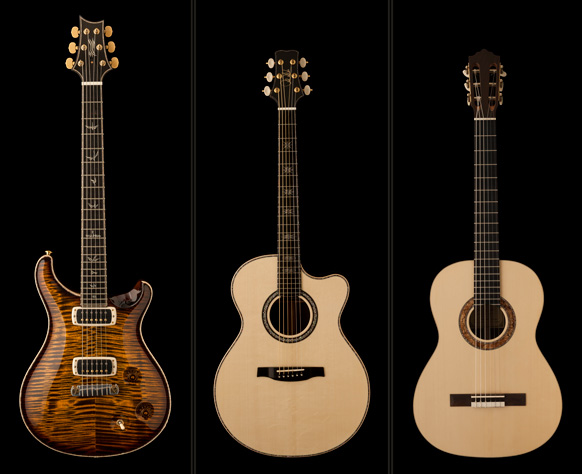 Paul Reed Smith guitar’s new permanent home at the Met, thanks to Warren and Kateryna Esanu, is celebrated by the public and dignitaries with a performance demonstration by John McLaughlin in the Met's Temple of Dendur in The Sackler Wing.

On October 7th, The Metropolitan Museum of Art in New York accepted a Paul Reed Smith electric guitar into its permanent collection. The presentation, a gift from Warren and Kateryna Esanu, included a public performance and demonstration of the guitar by PRS Artist and world-renowned guitarist John McLaughlin.

This custom made guitar from Paul Reed Smith Guitars, a Maryland instrument manufacturer, was built by the PRS Private Stock luthiers. It is made from the finest instrument grade woods – American curly maple for the neck, ebony for the fretboard and headstock veneer, European red curly maple for the top, African ribbon mahogany for the back and red heart abalone side body purfling. The “Museum Bird” inlays, specially designed for this instrument, were cut from mammoth ivory which is found regularly in arctic ice. The neck carve, 25” scale length, PRS narrow “408” pickups, electronics, knobs, and PRS designed stoptail bridge with brass inserts are all standard appointments for PRS. The guitar features a specially designed light tiger eye micro burst finish with natural binding.

Upon completing his performance demonstration, McLaughlin told the crowd, “I like to see instruments played instead of on display behind a glass box so”, (he continued with a grin) “I am going to have to come back every year to play this fabulous instrument.”

During a private reception following the public presentation, fourteen time Grammy Award winner and PRS Artist Ricky Skaggs surprised and delighted the Met’s Musical Instrument Department by presenting the Met with a Paul Reed Smith 2014 Collection Acoustic Steel String guitar and a Paul Reed Smith 2014 Collection Acoustic Classical Nylon String guitar to round out their Paul Reed Smith guitar collection. Skaggs offered, “These beautiful instruments are among the best sounding guitars that I have ever played and they truly are (works of) modern art.”

Only one curatorial department at The Metropolitan Museum of Art exhibits objects originally meant to appeal as much to the ear as to the eye. The Department of Musical Instruments holds approximately five thousand examples from six continents and the Pacific Islands, dating from about 300 B.C. to the present. The comprehensive collection illustrates the development of musical instruments from all cultures and eras. These instruments, selected for their technical and social importance as well as for their tonal and visual beauty, may be approached in a number of ways: as art objects, as ethnographic record, and as documents of the history of music and performance. The collection of musical instruments originated in 1889 with gifts of several hundred European, American, and non-Western examples most of which were donated by Mary Elizabeth Brown. A knowledgeable and enthusiastic amateur, Mrs. Brown continued to donate musical instruments to the Museum until her death in 1918, by which time some four thousand examples had been catalogued and placed on display. Successive generations of donors and curators have built the collection into one of the finest in the world. More than eight hundred instruments are currently on display in The André Mertens Galleries for Musical Instruments.

Visitors will have the opportunity to see this significant acquisition slated to be on permanent public display in The André Mertens Galleries for Musical Instruments at The Metropolitan Museum of Art.

Here are the specs for the 3 Met guitars:

Custom made Electric Guitar presented to the Metropolitan Museum of Art-

• Brazilian Rosewood Back and Sides with Paua Heart Purfling

• Brazilian Rosewood Back and Sides with Maple Purfling