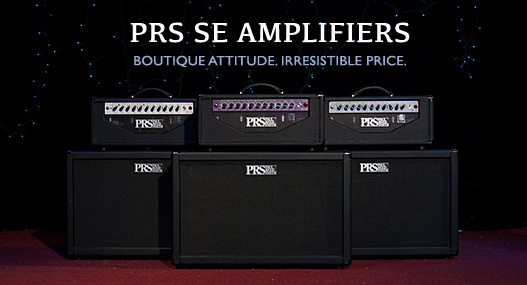 PRS Guitars is proud to officially announce the PRS SE amplifier line. Modeled after the acclaimed PRS SE line of guitars, this new amp line continues the concept of providing affordable musical instruments and equipment without sacrificing tone, usability, or quality. The lineup, scheduled to start shipping in the fall of 2011, includes the PRS SE 20 featuring 6V6 tubes, PRS SE 30 featuring 5881’s, and PRS SE 50 featuring EL34’s– all of which are offered as closed back 1x12 combos or as heads. The clean and lead channel gain stages are driven by 12AX7 preamp tubes. Loop, verb, and phase inverter utilize 12AT7s. These are all tube amps with all pots, jacks, and switches chassis mounted and tube sockets board mounted, offering incredible quality and value. A PRS SE 2x12 cabinet is available as well. All the amps in this family feature two channels with separate EQ, an effects loop, and reverb (all newer features for PRS –introduced on the 2 Channel “H” and “C”). Each amp also boasts custom wound transformers, 0.090 aluminum chassis, high-end “on-on-on” selector switches, only the best NNS tubes, custom-voiced speakers, custom knobs, and more

PRS Amp Designer Doug Sewell spearheaded this project from start to finish. Working with the PRS amp team, Doug designed and built a hand-wired prototype with high-end components. This was used as the tonal and functional quality baseline for this project. The team then worked with expert consultants to develop the final family of SE amps. “I cannot effectively describe the sense of teamwork, passion, and hard work associated with this endeavor, but I feel it is very evident in the final product…I personally cannot wait until I can purchase my own, or more realistically, one of each!” said Sewell.

PRS premiered these amps at an invite only event in early August at the Ottobar, a popular music venue in Baltimore, Maryland. With the support of National Bohemian beer (affectionately dubbed “Natty Boh”), local musicians, promoters, press, and club, label, and studio owners were invited to come be the first to check out these amps. Joey Santiago of the Pixies (already an endorser of PRS Mira and Starla guitars) was among the guests. After trying the 30, Joey said, “Great 2 channel amp. The clean channel is nice and clear. The high end is very pleasant. The overdrive channel has a great crunch and punch.” Overall, the premier was a great way to reach out to the music community and ask for their feedback, and as the night ended, it was clear PRS had a great new product.

Check out the new PRS SE Amps at the following pages: