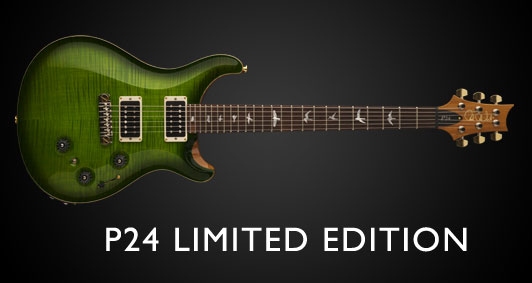 Piezo systems have long allowed guitarists the versatility of wielding both acoustic and electric guitar tones in one instrument. And while the acoustic tones created by the P24 are impressively natural, the highly-acclaimed 53/10 pickups are very musical as well. The 5-way blade pickup switch maximizes the versatility of these pickups by providing ample switching possibilities.

The company’s P22 model was released in January of this year and was met with great praise from artists, engineers, and producers alike. After a recording session with the P22, Grammy Award-winning Producer and Engineer Don McCollister said, "I have recorded and mixed hundreds and hundreds of acoustic guitars, including mixing both live and studio cuts, and I have never heard a more musical, more natural sound from an acoustic pickup system. If that had been the only thing special about the guitar I would have been excited, but then to hear the electric tones it creates - I was blown away.”

Likewise, the breadth of acoustic and electric guitar tones offered by the P24 make it a perfect go-to guitar for players of all kinds. For more information, please visit: www.prsguitars.com/p24. To locate an authorized PRS dealer or distribute, visit: http://www.prsguitars.com/dealer.php.