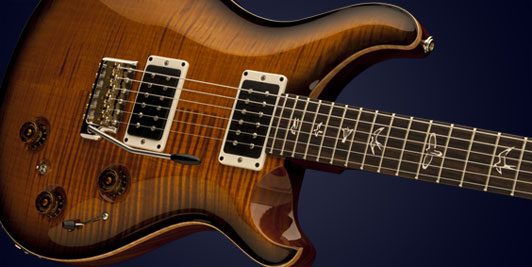 The best of both worlds just got more versatile with the introduction of PRS Guitars’ P22 Trem model. The solidbody piezo-equipped P22 Trem is essentially two guitars in one, providing the same classic humbucker tones and authentic acoustic sounds as the original P22 now with the added versatility of PRS’ prized tremolo bridge.

The P22 Trem’s voicing, EQ, layout, and feel as well as the redesigned PRS/LR Baggs piezo board are all maintained in this trem-equipped model, and the materials and design of the bridge have also been upheld without sacrificing any proprietary specifications. There are two output jacks on the P22 Trem, allowing guitarists to plug into their favorite electric or acoustic guitar amp or DI into a soundboard. By utilizing the separate blend control, the tone of the P22 Trem’s 57/08 pickups can also be combined with acoustic sounds through a single output.

Starting with the tried-and-true combination of a figured maple top, a mahogany back and neck and a rosewood fretboard, the P22 Trem looks as good as it sounds. For more information and to watch a demo video, visit www.prsguitars.com/p22trem.