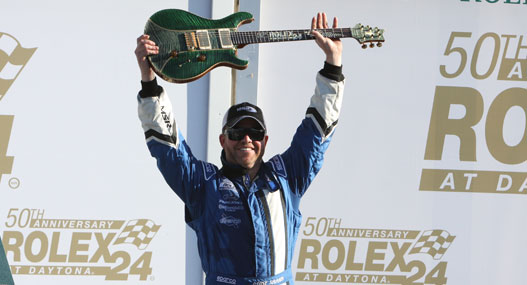 With the help of Guitar Center, the world’s largest musical retailer, PRS hosted three exciting concerts in the Sprint FANZONE during the 24-hour endurance race. Sixteen year old Alex Trimblett, winner of the In Tune Race to the Stage competition, opened up for guitar sensation Orianthi on Saturday night. He played with the Rocky Mountain Stoneflies, a PRS house band comprised of veteran musicians. Orianthi then took the stage, backed by the Paul Reed Smith Band, and delivered an incredible performance filled with sensational vocals and impressive guitar solos. To close out the evening, the Stoneflies returned to the stage and played a set with guest appearances from Paul Reed Smith, Davy Knowles (PRS signature artist), Jeff Smallwood (GRAND-AM Racing), and Greg Di Benedetto (Guitar Aficionado magazine). The third concert featured Davy Knowles, a phenomenal guitarist and vocalist from the Isle of Man. These performances added an exciting new element to the race and had eyes temporarily glued to the stage.

The overall Daytona Prototype (DP) winner of the high-endurance event, Michael Shank Racing, took home the PRS Private Stock Custom 24 trophy instrument, which has a retail value of $16,000. PRS President Jack Higginbotham presented the guitar at the podium in Daytona’s Gatorade Vistory Lane to Michael Shank who exclaimed, "I've been looking forward to this one!" In the Grand Touring (GT) class, Magnus Racing took home the first of the 2012 PRS GRAND-AM trophy guitars with their first ever GRAND-AM win. The Magnus Porsche GT3 Cup car has flown PRS decals for two years, making this victory especially rewarding for the Stevensville, Maryland instrument manufacturer.

In an effort to bring these experiences to fans, PRS helped sponsor two promotions in conjunction with the Rolex 24 At Daytona. Guitar Aficionado magazine, Guitar Center’s Platinum Room, and PRS held a sweepstake to win a VIP racing experience. The winner, Tony Benken from Nashville, TN, received a replica of the PRS Private Stock Custom 24 trophy guitar signed by a plethora of Rolex 24 champions, meet and greet opportunities with PRS artists, hot laps with four time Rolex 24 At Daytona winner Scott Pruett, a magnum of Pruett's award-winning wine, and a tour of the paddock by Pruett himself.

As the 2012 season continues, be on the lookout for PRS decals on TRG, Turner Motorsports, and Magnus Racing racecars and the PRS GRAND-AM trophy that will be presented to the DP and GT winners of each Rolex Series race. Guitar Center Fan Days will be held in conjunction with three additional 2012 races - Watkins Glen International, Indianapolis Motor Speedway, and Mazda Raceway Laguna Seca. These events bring fans many unique opportunities, including free setups on PRS guitars, meetings with product specialists from the PRS factory, in-depth product demonstrations by PRS staff, the chance to meet GRAND-AM personnel and experience their interactive mobile display, and the opportunity to purchase a replica of the 2012 GRAND-AM trophy guitar from Guitar Center, the exclusive dealer for these instruments. Guitar Center Fan Days also host the In Tune Race to the Stage auditions for teenage guitarists to win a chance to play at a Rolex Series race.

“It was an honor to be part of the 50th Anniversary Rolex 24 At Daytona. We have worked hard for ten years to bring together the worlds of racing and music and we feel we accomplished that over the weekend in a way that eclipses our previous efforts. Working with DIS, GRAND-AM, In Tune, Guitar Aficionado, Guitar Center, and all the musicians to pull together each element was enormously gratifying to the entire PRS team,” said Jack Higginbotham, PRS Guitars President.