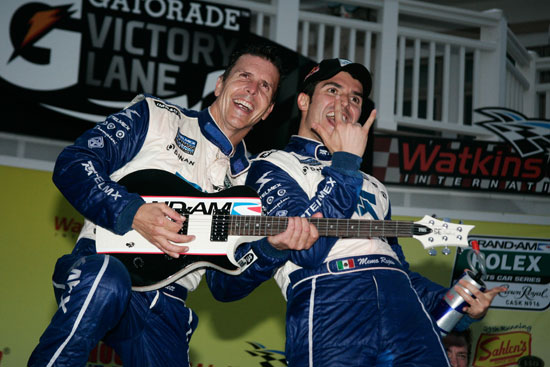 PRS kicked off its 2011 partnership with GRAND-AM Road Racing at the Rolex 24 Hours At Daytona last weekend. At the end of the historic endurance event, the overall win went to the Ganassi team of Pruett, Rojas, Rahal and Hand. Pruett and Rojas took the 2010 championship and are no strangers to PRS guitars as they have scored a total of nine trophy guitars for the Chip Ganassi team.

New for 2011, the winner of the GT class will also receive a PRS GRAND-AM guitar. The winning GT team at Daytona was the TRG Porsche of Bertheau, Gaughan, Henzler, Lally and Pumpelly who came from a last place start to win the 24 hour event, a Rolex watch and a PRS guitar.

The trophy is based upon a PRS SE Singlecut with special artwork developed by PRS for GRAND-AM.

Scott Pruett said of his 2010 PRS trophy, “What a race, what an event and what an incredible finish in front of a record crowd. For me this is a dream come true. With the win comes the much coveted Rolex watch. Known for its craftsmanship, quality and precision, the Rolex represents excellence. Now to ‘sweeten the pot’ the winning team receives a PRS guitar. PRS represents the same qualities of excellence, making it a perfect addition to the grand prize. When you get to the podium after the race and receive those special gifts it's magical!”

PRS will present a guitar to each race winner in the DP and GT classes throughout the season.