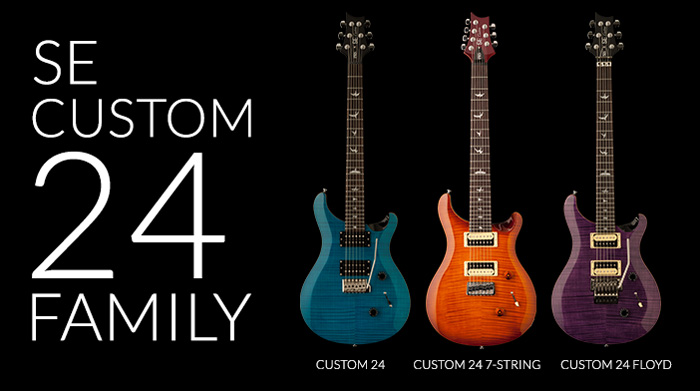 In 1985, PRS Guitars introduced the Custom 24 guitar which has ultimately been said to have “ushered in a second golden era of guitar making.” Years later in 2005, the Stevensville, Maryland manufacturer expanded their imported SE line of instruments with the SE Custom 24 model, which is made to PRS’s exacting specifications at a more affordable price point. Just as the PRS Custom offerings have expanded inside of the company’s Maryland-made Core line of guitars, the SE line has now broadened to three distinctly different Custom 24 models: The classic PRS SE Custom 24, the popular SE Custom 24 7-String (introduced in 2013), and the new SE “Floyd” Custom 24 (new for 2014).

Perhaps the most distinctive of the SE Custom family is the SE Custom 7-string, which is the first 7-string production instrument offered by PRS Guitars. With the addition of a low “B” string, this guitar offers increased tonal range, an extended low-end growl and a greater ability to embellish standard chords. The SE Custom 24 7-String comes standard with a plate style, string-through-body bridge.

Well suited to a variety of styles and attractive to a broader modern customer base, the new SE Custom 24 family of electric guitars offers the perfect combination of playability, sound and craftsmanship at an extraordinary value.