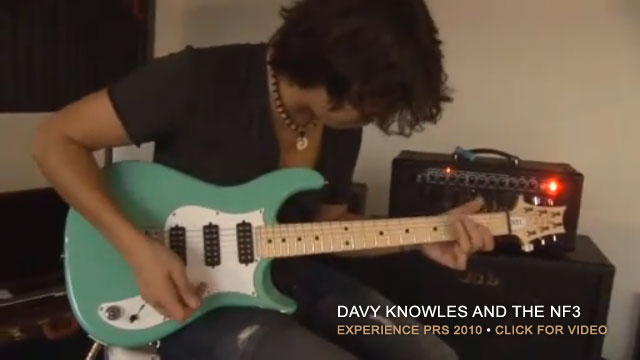 PRS Guitars is proud to announce that the new NF3 model has received the Musikmesse International Press Award (mipa) in the “Best Electric Guitar” category for 2010/2011. Press from all over the world voted for this year’s most revered musical gear, and winners were announced at the Musikmesse/Prolight + Sound trade show in Frankfurt, Germany on April 7, 2011.

“Everyone at PRS really appreciates the acknowledgement and support we have received from the press for the NF3. It was a challenging guitar to develop, with the three pickup configuration and the Narrowfield® pickups, and it’s a guitar that breaks away from traditional pickups in a cool way. We hope discriminating players find something special in the NF3 that they can’t find anywhere else,” said Paul Reed Smith.

The NF3’s redesigned flat, korina body and its three proprietary PRS Narrowfield® pickups are standout features for this new model, lending to a very classic look and sound that sets it apart from the PRS pack. With the best traits of a humbucker, P90, singlecoil, and mini-humbucker, the Narrowfield® pickups give this guitar a distinctively familiar yet completely new sound and feature the same wire as PRS’s coveted 57/08® pickups – the width of the Narrowfield®, however, is squeezed from pole to pole and goes deeper. Steel tremolo bridge system components also contribute to its clear and expansive tone, and additional innovative updates include a retro “V12” finish and a “Pattern Regular” neck shape.

• Paul Reed Smith and the NF3

Learn more about the NF3: www.prsguitars.com/nf3