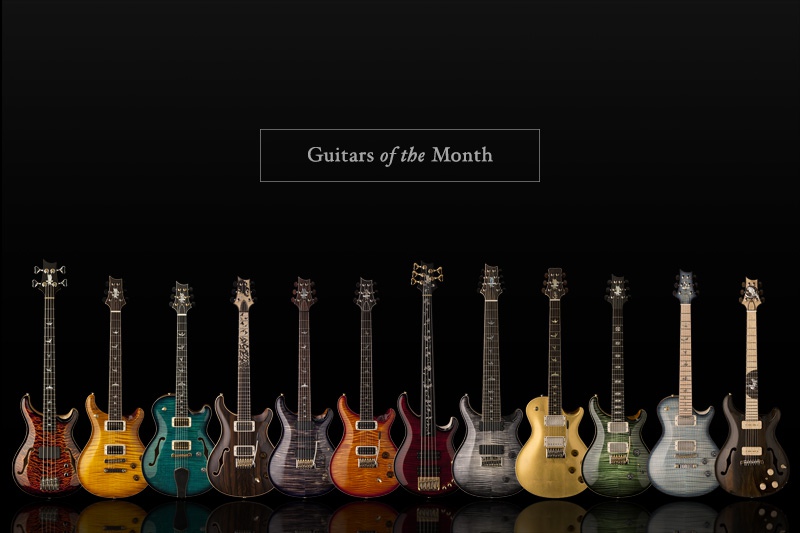 2016 marked the 20th Anniversary of PRS Guitars Private Stock and to celebrate, PRS brought back the program that started it all: Guitars of the Month. Each month, the Private Stock team of craftsmen let their creativity shine using some of the most exotic and exquisite tonewoods and inlay materials available including African ribbon mahogany, Madagascar rosewood, highly-figured curly maple, green ripple abalone, ziricote, and swamp ash. The cumulative result of the program is twelve extraordinary, highly collectible models, each crafted in very limited quantities and each bearing the Private Stock Eagle and engraved banner stating the commemorative month.

Available through select authorized PRS dealers and distributors, the Private Stock 20th Anniversary Guitars of the Month models are:

“Celebrating Private Stock’s 20th Anniversary by revisiting the Guitars of the Month program gave the team the opportunity to showcase both innovation and specialization. These instruments are simultaneously art, musical Instruments, and treasured possessions to joyfully spend time with,” stated Paul Reed Smith.

Each model has its own web page with multiple photographs detailing the artistry and listing complete specifications. While most of these instruments were scooped up by collectors, guitar players, and guitar enthusiasts, there are still a small number available and each model page offers a list of dealers and distributors who carried the instruments.

PRS Guitars completed the first Private Stock on April 19, 1996. The twenty year old program started as a way to recapture the original essence of the PRS workshop with a small team making fewer guitars with more customization. With this mentality, Private Stock has allowed customers the opportunity to design the guitar of their dreams, and along the way Private Stock has also developed exclusive models and one-off instruments of their own design. In addition to customization opportunities, Private Stock instruments are built with the finest woods, materials, and attention to detail.

The original Guitars of the Month were cased between December 1994 and March 1996. They provided the opportunity to experiment with new ideas and led directly to the creation of the Private Stock program with the first “official” Private Stock instrument casing on April 19, 1996.

To see more information about Private Stock and the Guitars of the Month, click here!