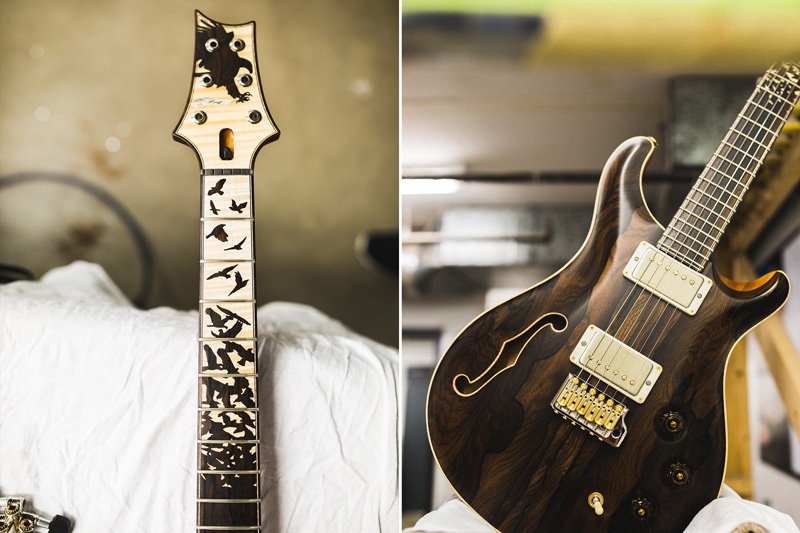 PRS Guitars is celebrating the 20th Anniversary of Private Stock with a revival of the program that started it all: Guitars of the Month. Each month in 2016, the Private Stock team will be offering a unique design in limited numbers that will highlight the fine craftsmanship and remarkable playability that the Private Stock team is known for while utilizing some of the most deluxe materials available. For April, PRS is releasing the DGT “Birds of a Feather” Semi Hollow model; a vintage-appointed guitar that is all about the details. Based on the original McCarty model, the DGT (David Grissom Trem) adds a signature neck shape, taller frets that sport larger gauge strings, custom-spec’d pickups, and a unique control configuration. Only twenty of these instruments will be made for April 2016.

The DGT neck shape is based on two of Grissom’s favorite PRS guitars and comes in between a Pattern/Wide Fat and a Pattern Regular/Regular. The frets and 11-gauge strings, combined with other appointments (thicker back, and 22-fret neck), give the DGT a beefy tone. The pickups were finalized after a year of A/B-ing more than forty variations. The resulting tone has ample depth without losing any openness. The control layout features two volume controls and a push-pull coil-split tone control, providing tons of versatility and control.

“Innovation, and specialized craftsmanship continues to be at the heart of the Private Stock program, and we are very excited to release some new ideas celebrating our 20th Anniversary,” said Paul Reed Smith, PRS Guitars founder. “The DGT Birds of a Feather, takes the time proven features from our signature David Grissom model and brings it to Private Stock’s Guitar of the Month program, and all the enhanced detail work add up to be a special take on a very iconic PRS model.”

To see this guitar and to learn more about the 20th Anniversary Guitars of the Month program including a list of dealers and distributors that offer PRS Private Stock instruments, click here.