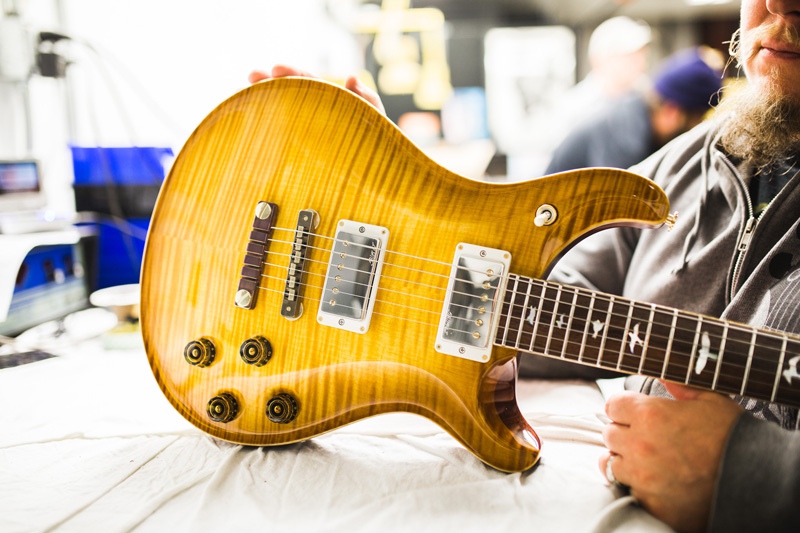 PRS Guitars Private Stock is celebrating their 20th Anniversary this year with the return to the program that started it all: Guitars of the Month. Each month in 2016, the Private Stock team will deliver a unique design in limited numbers, highlighting the detailed craftsmanship and exquisite materials that define Private Stock.

“At the time [1996], the original Guitars of the Month program was a way for us to experiment with new designs and features. To this day, that innovation and specialization is still at the heart of the Private Stock program, and we are very excited to try out some new ideas for our 20th Anniversary this year,” said Paul Reed Smith, PRS Guitars founder and Managing General Partner.

February’s Guitar of the Month is the McCarty 594. Named after Paul’s mentor, Ted McCarty, the McCarty 594 pays homage to vintage “Golden Era” instruments while incorporating modern build techniques for an instrument that is at once incredibly familiar and effortlessly playable.

John Mayer has one of the early prototypes for this model, and has this to say: “The 594 is the best new guitar I've played in years. It has a vintage heart and soul but without the technical limitations that usually come along with an old instrument. What good is an old guitar if you can't get all that feel out of the upper frets, or the intonation is off?” When asked about the guitar’s tone, Mayer added, “To hear that old PAF sound but be able to articulate the notes in a way that only modern manufacturing could allow is so exciting. This one's going all over my new record, because it sits so nicely between all of the sonic identities we all know and love. And it plays like a dream.”

There are several details that PRS has incorporated into the 594’s design that contribute to the guitar’s tone and feel, including:

- 2 volume and 2 push/pull tone controls positioned so players can roll off both volume knobs at the same time, and with the added versatility of coil splits for more tonal options

- A new Pattern Vintage neck carve. This neck carve shares the same width measurements as PRS’s Pattern neck, but is slightly thicker front to back and features an asymmetrical carve with a little less meat on the treble side, a little more on the bass side of the neck.

Twenty six of these instruments will be made for February 2016, commemorating Private Stock’s 20th Anniversary. For full specifications and to hear the McCarty 594 in action, click here!

For more information on the Guitars of the Month program, please visit: www.prsguitars.com/privatestock