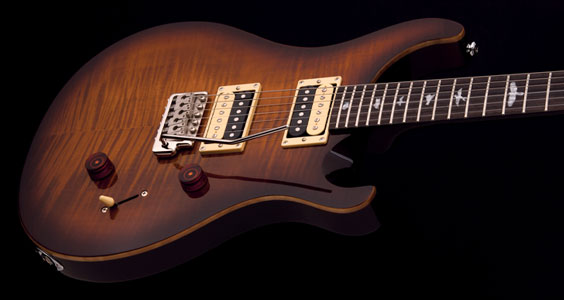 The PRS SE Custom will be updated for 2012 with a new body carve and pickup control configuration. Previously the SE Custom had a flat style body, but for 2012, the popular SE model will receive a beveled top carve, more reminiscent of PRS Guitars’ original Custom 24 model. The SE’s pickup control layout for 2012 will be one volume and one push/pull tone control paired with a 3-way blade switch. The addition of a coil tap on the tone control will give increased versatility, allowing guitarists to split the SE HFS and SE Vintage Bass pickups into singlecoils for the first time. The move from 3-way toggle to blade switch will provide more control and consistency with PRS’s Maryland made line.

“Our SE Custom is following the updates to our Maryland built Custom on an aggressive timeline. These updates provide an excellent instrument at an excellent price,” said Paul Reed Smith.

The updated SE body shape will also come standard on 2012 SE Paul Allender, SE Nick Catanese, and SE Orianthi models, with the SE Orianthi making the added change from a 3-way toggle to a 3-way blade switch. New for 2012, the SE Dave Navarro will receive the updated beveled top as well.

These new features can be seen for the first time at the winter NAMM show in Anaheim, California from January 19-22 at PRS Booth #5320.