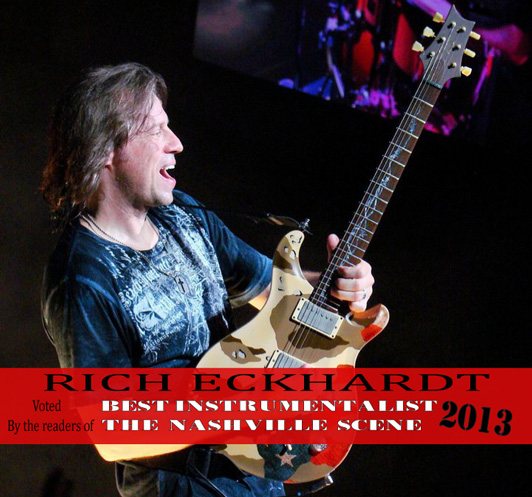 The readers of The Nashville Scene have spoken and voted Rich Eckhardt as Best Instrumentalist in Nashville in their 2013 Readers Poll.

With well over 2,500 concert performances and 2 critically acclaimed solo CD’s to his credit Rich Eckhardt has irrevocably been recognized by the readers of the chic and trendy Nashville Scene as the Best Instrumentalist in their 2013 Readers Poll.

Rich has been a high demand touring musician since 1989 and has slung his ax with some of the industry’s biggest names including Blake Shelton, Sammy Hagar and Shania Twain. Rich has been playing lead guitar for Country Superstar Toby Keith for the last 16 years where he has toured the world entertaining not only Country music fans but military soldiers stationed in Iraq and Afghanistan.

Rich Eckhardt is currently working on recording a track for a benefit Christmas compilation CD set to be released November 1st. Proceeds will benefit the Sobriety America Foundation. This week Rich is also filming a minor roll as a guitarist on the top rated ABC Network show Nashville.