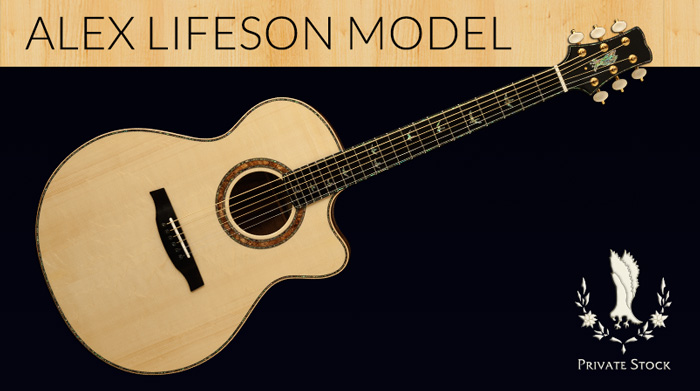 PRS Guitars is pleased to announce the new Private Stock Alex Lifeson Thinline acoustic guitar, new for NAMM 2014. While the craftsmanship and attention to detail are very consistent with other PRS Private Stock acoustics, this instrument embodies some new design elements that take the instrument in a unique direction. The Alex Lifeson signature PRS acoustic is slightly thinner than the company’s Angelus Cutaway and Tonare Grand and is constructed in such a way that it lends itself to louder stage volumes and the rigors of the road.

“During the 2013 Rush Clockwork Angels Tour, I had the opportunity to spend some time with a PRS Angelus Cutaway. It quickly became my pre-show warm up guitar, and I spent many hours in many hotel rooms lost in the gorgeous sound and tone of that beautiful instrument. I'm very happy to announce that I have collaborated with PRS to develop an Alex Lifeson Signature model based on this superlative platform,” said Lifeson. “If you're like me, you won't be able to put it down.”

“We are honored to work with Alex, a guitarist with world-renowned acclaim, experience, and talent. It would be difficult to find a better person to lend a discerning ear and such voluminous experience to a project like this. Our goal has been to develop a musical instrument that can perform equally well at home, on the stage, in the studio, or in the practice room. With Alex, we have found the perfect balance of all the above in an elegant package,” Jack Higginbotham, President, PRS Guitars.

The PRS Private Stock Alex Lifeson Thinline acoustic will be available starting in the spring of 2014. More details on this model can be found here: www.prsguitars.com/alexlifeson/